Since April, new jobs posted for retail and streaming services have accounted for nearly 55% of the Walt Disney Company's total postings, according to a new report from GlobalData's Job Analytics.

The recent hiring trend shows a shift to the new Disney+ video-on-demand streaming service and retail Disney Stores to offset the impact of COVID-19 on Disney's theme park business, according to the analysis.

The company’s hiring declined steeply in Q2 with the onset of the pandemic (chart below), and didn't show signs of recovery until July, but hiring remains strong in the media networks and direct-to-consumer and international segments.

“While the company is expected to lay off over 28,000 of its workforce in 2020 and has furloughed 100,000 with the lockdown of its parks, Disney’s focus for the remainder of 2020 will be on DTC and its retail businesses,” said Ajay Thalluri, business fundamentals analyst at GlobalData.

“Disney’s dreams for Disney+ are for it to transcend from a streaming service to be a distribution tool for hot blockbuster releases at a premium to boost profitability -- demonstrated by the fact that they charged $30 for ‘Mulan’ on the service when it was pulled from cinemas," Thalluri continued. Having already hit more than 100 million subscribers, surpassing its target of 60 million to 90 million by 2024, Disney+ is "emerging as a major challenger to the market leader Netflix, which has over 190 million subscribers."

On the retail front, Disney is keeping its permanent hiring in check while increasing job postings for temporary, fixed-term contract, seasonal and part-time jobs, according to the report.

“There is going to be a direct relationship between Disney+ and Disney retail," with Disney likely to use Disney+ as a platform to push its merchandising and drive traffic to its retail arm," said GlobalData Thematic Analyst Danyaal Rashid. "Disney’s advantage, in this sense, is that it is prominent in the children’s space, a key merchandising target market.” 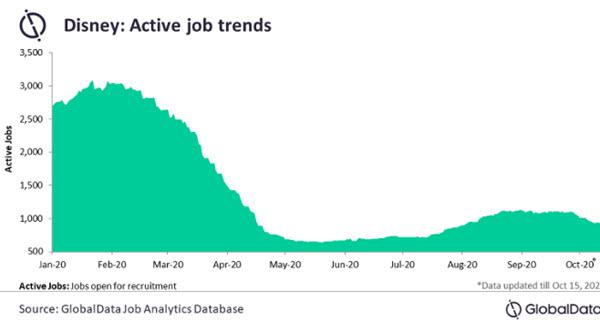