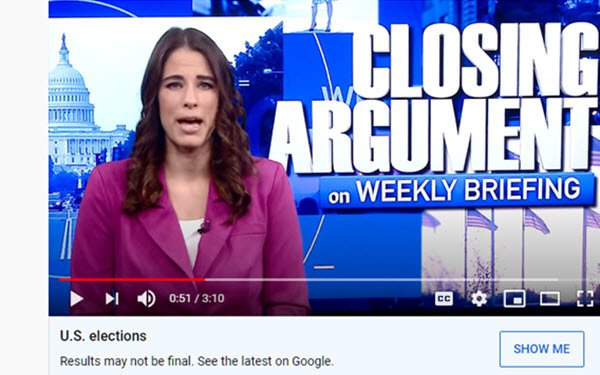 In another example of social media's inconsistent, flip-flopping approach to staunching misinformation during the still-in-progress U.S. election, Google-owned YouTube is refusing to take down a video, posted by the Trump mouthpiece One America News Network, that at least one YouTube spokesperson admits violates the platform's policies.

The video, dubbed “Trump Won,” not only makes that false claim, but also falsely claims that Democrats are somehow engaging in “rampant voter fraud” against Republicans, and calls on viewers to “take action” and "rise up" against Democrats.

YouTube’s policies say it will take down content “encouraging others to interfere with democratic processes, such as obstructing or interrupting voting procedures,” and since last month have also prohibited conspiracy theory videos that encourage violence, notes CNBC, which first spotlighted the video.

YouTube spokesperson Andrea Faville told CNBC that its Community Guidelines only prohibit misleading viewers about voting or discouraging voting. “The content of this video doesn’t rise to that level, so it wasn’t removed,” Google stated.

Instead, Google put a note on the video stating: "Results may not be final. See the latest on Google." (Yesterday, Google news inaccurately claimed that Joe Biden had won Virginia, before that state's results were official.)

At the same time, in another statement to CNBC, from Google's Christa Muldoon, directly contradicting Faville, confirmed that ads had been removed from the video because “We do not allow ads to run on content that undermines confidence in elections with demonstrably false information. The election has not been called. Therefore, this is in scope of our demonstrably false policy and will be demonetized on YouTube.”

The false video is currently showing more than 370,000 views. One America's YouTube channel has 193,000 subscribers.