For CBS Sitcom, Anti-Police Protests Are No Laughing Matter 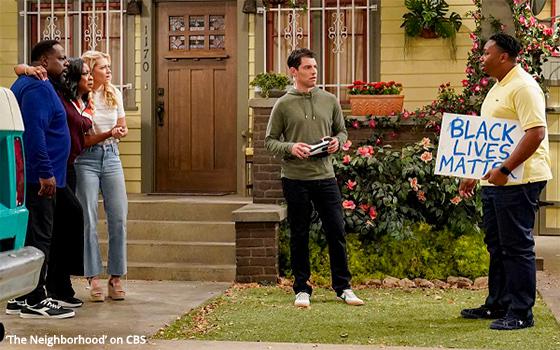 Grim, serious current events and trends present a challenge for any television comedy, which is likely why so few of them take them on.

Next week, on Monday night, the CBS sitcom “The Neighborhood” will return for its third season with a premiere episode that addresses the current issue of police brutality directed at African-Americans.

By their nature, serious subjects would seem to fly in the face of a TV comedy’s true purpose -- which is to present funny situations that make us laugh.

In light of that goal, many people might argue that TV comedies should leave the serious stuff to the TV dramas.

However, “The Neighborhood” is a sitcom that is designed as a weekly examination of black-white relations, with its premise of a young, white couple moving next door to a black family in a predominantly black neighborhood.

With that premise in mind, it stands to reason that the writers of this show must have found it impossible to resist raising the issue of the Black Lives Matter movement in their show.

The problem is, making something so serious work well within the confines of a sitcom like this one is a very tall order.

They give it a good try, but “The Neighborhood” is not exactly “All in the Family” or any other landmark TV sitcom from Norman Lear (or anyone else) that tackled current issues and subjects regularly, whether or not those efforts turned out to be funny.

In “The Neighborhood,” one of the grown Butler sons (that’s the African-American family headed by Cedric the Entertainer) is set upon by police, who beat him and arrest him for reasons that are never explained in the show.

What follows is anger and indignation on the part of his family members, and sympathy and support from their white neighbors, the Johnsons.

Understandably, there are almost no laughs or genuinely funny lines in the episode, although the producers illogically decided to add frequent laugh tracks in post-production anyway.

The show would have been better served by ditching the need to provide the illusion of laughter. The canned laughter comes across as inappropriate and even jarring.

In addition, the show takes a simplistic approach to the issue of police brutality in the African-American community that feels shallow at times.

Many of the statements made by the show’s characters on the subject -- both the black characters and the white ones -- are over-generalized and debatable. Indeed, elsewhere on TV, these same issues are being debated nightly.

The episode deals with the police brutality issue at the expense of the other issue in all of our lives, COVID-19.

In this “Neighborhood,” the pandemic is not mentioned. Nor is it suggested by the sight of characters or even extras wearing face masks.

However, the episode ends on a reasonably hopeful note. To end the episode, the producers and writers chose to play a great piece of music over real-life footage of some of this year’s peaceful protests (as opposed to the non-peaceful ones).

The music is “Wake Up Everybody,” a song released in 1975 by Harold Melvin & the Blue Notes featuring lead singer Teddy Pendergrass.

Season Three of “The Neighborhood” starts Monday night (November 16) at 9 Eastern on CBS.