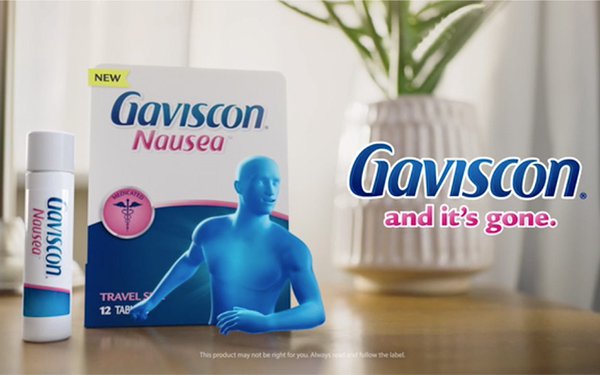 Prestige Brands is launching a campaign to promote its new Gaviscon Nausea medicine in Canada. The work is from agency Fuse Create.

The original idea was to launch this new brand extension building off the equity Gaviscon has built around heartburn to take on nausea giant Gravol in Canada.

FuseCreate did not want to be vague about the product’s core purpose by alluding to “feeling better” via images of white sandy beaches and bicycle rides. “We wanted to ensure people could relate to the moments that might cause them nausea,” explains Steve Miller, executive creative director, Fuse Create. “We were able to bring those moments to life in an animated way, while still communicating relief.”

The creative introduces the brand’s first animated character, a somewhat gluttonous Gavin, who is shown eating outsized portions of various comfort foods. Not surprisingly, the little blue fellow gets a tummy ache, but recovers after taking Gaviscon Nausea.

COVID-19 altered the campaign. Originally the storyboard featured a human's day-to-day misadventures. COVID’s lockdown pivoted the creatives to instead animate the Gaviscon character. “While we still had to provide feedback and approvals over video calls, the process was smooth, and we were still able to tell a relatable story,” says Miller. The media buy, handled by UM, is focused entirely on TV, running through the end of January. The ads air both in English and French across all Canadian provinces.