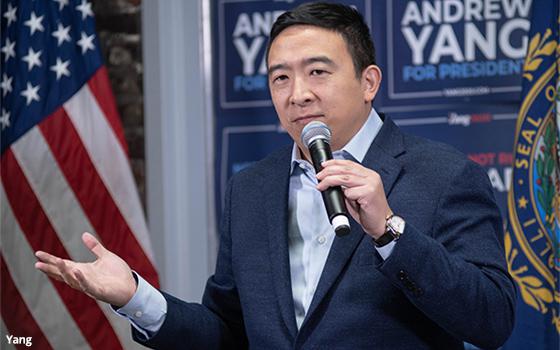 Weighing in against Google, former Democratic presidential candidate Andrew Yang is urging a federal judge to allow a group of Chrome users to proceed with a privacy lawsuit claiming that Google wrongly collects their data.

“The California Constitution establishes (and courts have recognized) that Californians have a property interest in their own data,” Yang argues in a proposed friend-of-the-court brief filed Tuesday with U.S. District Court Judge Lucy Koh in San Jose, California.

Yang is seeking to file a friend-of-the-court brief in a battle dating to July, when Patrick Calhoun and several others alleged in a class-action complaint that Google wrongly collects personal information from logged-out Chrome users -- including IP addresses, identifiers stored on cookies, and data about web-browsing activity.

In their complaint -- which alleges breach of contract as well as violations of the federal wiretap law and an anti-hacking law -- they accuse Google of violating Chrome's privacy notice, which states that “personal information” will only be sent to Google if users sync Chrome with their accounts.

Google also says that Calhoun and the others lack “standing” to proceed with some claims because their complaint doesn't spell out how they allegedly suffered the kind of injury that would warrant a lawsuit.

Yang is urging Koh to reject Google's contention that the users lack standing, arguing that California law -- including the 2018 Consumer Privacy Act and the recently passed Proposition 24, which Yang supported -- show that California recognizes a property interest in data.

Those measures “conclusively resolve the issue before the court and confirm that consumers’ data is, indeed, their property,” Yang argues.

He adds: “The people of California have spoken through both their elected officials and the ballot box and have clearly articulated the desire for heightened protections over their data.”

Koh is expected to hold a hearing in the case in February.