Nurx Looks Beyond The TeleHealth Boom 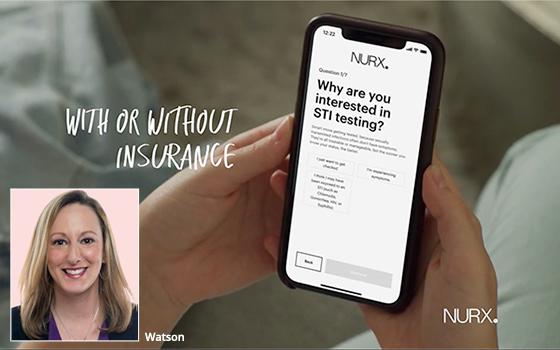 How much of the digital business surge this year is the result of temporary lockdown culture and how much is attributable to your native marketing genius? Granted, this is a first world problem, but many marketers are starting to think about how best to retain the business that dropped in their lap since March.

The path back to real-life interaction is unpredictable in most categories, but is especially acute for the telemedicine sector, where the hands-on doctor/patient experience is as old as Hippocrates and the days when shamans made cave calls.

Nurx CMO Katelyn Watson has been thinking ahead, and is already calibrating her media buys and content with the expectation the wave of telehealth activity will ebb and diffuse eventually.

Nurx is a vertical telehealth provider, offering patients online connections with their own doctors as well as prescriptions, ordering, delivery and follow-up.  Watson is a veteran of startup marketing, with previous marketing roles at IfOnly and Kabbage. You can listen to the entire podcast here.

MediaPost:  There are a number of players in the telehealth space. What key value propositions does Nurx bring to market, and how do you really differentiate yourself?

Katelyn Watson: A couple different ways. So we're really end-to-end health care, primarily for women. We’re very female-centric. And we focus on the full journey of healthcare. You get to chat with our providers, getting your prescription, if appropriate, getting that delivered in very discreet packaging directly to your home, processing your insurance as well.

And then we're there for you when you have questions, whether it's migraines or birth control or testing. A lot of people will have side effects or questions after they get their medication, and they're able to come back to our providers for an entire year to ask any types of questions.

MP: Is that highly verticalized structure the direction telemedicine brands are taking? Convenience-directed?

Watson:  Just within the last couple of years, we've added testing, herpes treatment, migraine treatment within the last two months. And we accept insurance for all of these services, which is highly complicated, but very important to us as being a real healthcare company. So that is a core differentiator.

I think that going cash-only is empowering as well, because getting to scale and keeping cash prices low is important. But the reality is that patients who have insurance, want to use it.

MP: Since you mentioned performance marketing, are you following the typical D2C playbook, or are you leaning into different channels?

Watson: We've been surprised by some channels that are a little more app-based. We aren't necessarily app-first. But some people like to make their requests through the app and do their chatting through the app. So we've seen some of the app acquisition-based channels perform better than they have, for me at least in other different types of retail and other companies.

We've leaned into TV pretty heavily, a combination of linear, as well as OTT. That really ramped during the pandemic. We had the perfect storm of really cheap media, customers that were kind of ready to go, and people were also paying attention. So TV kind of came in as a bigger channel for us during the pandemic and has continued throughout.

We're starting to go into more conditions-based areas like migraines. Birth control is sort of relevant to most women within a certain age group. So we can use performance marketing or actually go into pretty untargeted media and do pretty well in those areas with optimizing creative and all of that.

But some of the newer channels that are more focused on conditions really bring in the data aspects of people who've said they have a certain condition. But also things like herpes, things like migraines, areas that are very community-based. So I won't specifically call out the channels, but different channels where people are asking questions and going back and forth within a community about their conditions are areas that we've been experimenting with that maybe didn't work as well for broader-based subjects. Once the subject matter gets a little tighter on a specific condition, it has a lot more promise.

MP: So from a marketing perspective, what's been the biggest challenge for this rush of interest in telehealth over the last few months?

Watson:  I would say that the keeping up with the scale from an operational perspective and forecasting has kind of been thrown out of the window this year. Fortunately, we were able to get more capacity across all of those fronts. And now that we've scaled up, how do we make sure that we're able to maintain the volume that we've promised. And I think that that's a lot of where what we thought about during COVID spikes was making sure that the brand was front and center. Because we knew that we'd come out of this on the other side at some point in terms of opening things back up and going to some resemblance of normal. And we also knew that at the same time every brand, large, small, early stage startup etc. was going to try to get into telemedicine. We needed to make sure that along the way we were focused heavily on content and education, and helping our patients along the way, so that when we do come out on the other side, they're more loyal than they ever were before to Nurx in particular.  So that when we start launching these other new services they want to use us.

MP: Interesting, you need to sort of make sure that you're not just simply riding the wave, but understanding at all points the wave is going to ebb. And that means brand building while you're reaping the benefits of the circumstance.

Watson: Exactly. And again not brand building through celebrity influencers and things like that. It was really brand building through the patients that we were getting at all points in the funnel and really pushing that empowerment and education message home through our content. We added some conditions based resource centers, one for migraines, one for STIs, and so on, and then pushed those out through all of our channels. We also launched a top trending questions Resource Center. Really just trying to be top of mind for people and really helpful. Once they either came into the funnel with Nurx or actually became a patient.

MP: A lot of people that I've talked to this year like to say that we have advanced five years in the digitization of their industries in just 8 months. Has that demand outstripped our preparedness for it?

Watson: I think it really just comes down to the awareness and the willingness from patients where at a certain point in time they were forced to do something that maybe they wouldn't have done before. And they realized, hey this is okay, and they don't want to go back to the old way. So I don't think so. I think what it actually does is it builds upon those models and it adds more and more opportunities for other points of care. You've just seen in the past several months that everyone has hopped on to behavioral health.

People are coming into, as Nurx did as well, COVID testing. And COVID testing kind of started lending itself to primary care visits and really just continuing to pile on in a good way.

Where I think this will really evolve is how do you then look at the whole patient and not just look at the patient for all of these point solutions. And then [how do you] cross adopt them into other point solutions. And that really comes into the tools that are built for providers to care for a patient, how you onboard a patient, etc. And so I think that's really where the core opportunity will lie. Now a lot of these early, mid, late stage direct to consumer telemedicine companies have kind of figured out their niches. It paves the way for the future, and thinking about how all of these different things are integrated, and that is certainly what Nurx is looking at as well.

MP: So sort of virtualizing the general practitioner vision, the more holistic vision of the patient.

Watson: Exactly but not necessarily in a primary care sort of way. It really means a lot of different things to a lot of people. Within that, there's urgent care, and then there's all of these other things that you might need more frequently. Other things that you need less frequently like basic sore throat, ear infection, UTI. So I think it really depends on the brand and the balance of what it makes sense for them to bring in for the types of patients that that they're serving.

MP: So you mentioned that your forecasting has gone out the window. But everybody needs to do something, right? How do you manage that expectation of constant change, bake flexibility into the system? Is it contingency modeling? Different deals with media?

Watson: It's really all of those things. I think [it’s] making sure that we're ready with a best and worst case scenario and probably coming in at the middle ground. For us, we're so reliant on our providers in terms of the throughput, as well as our pharmacy and there's an inventory component. The operational aspects of the end-to-end is really a lot, and making sure that we have the right level of staffing to drive the right margins. But we work really closely with our operations teams on the sort of high medium low forecasts and then are meeting daily to adjust kind of where we are.

But yeah, we're definitely not there yet as far as the perfect ability to predict. Because people are still coming into the market. We just came out of an election. Now we're coming into Q4 with holiday. It's kind of always something. And then we're starting with a much bigger baseline of awareness in January. January Q1 is typically a time when people are rethinking their health care services, making changes, have insurance changes at Open Enrollment. So the ways that we've forecasted in the past have just changed where we're just showing a lot more breadth of options.