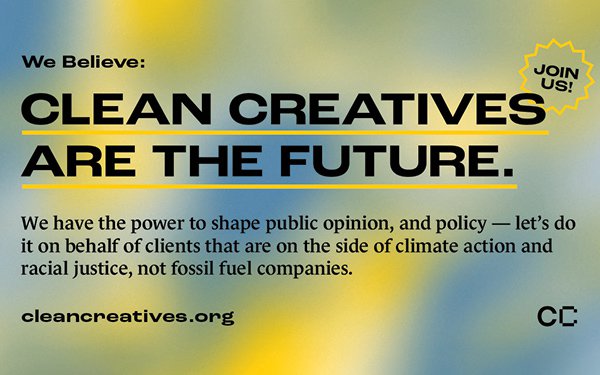 Fossil Free Media is issuing a call-to-action to pressure advertising agencies and PR firms to stop working with the fossil fuel industry.

The Clean Creatives campaign is designed to shame specific companies that have or continue to work with fossil fuel clients.

“Despite their sustainability goals and past pledges to stop working with climate deniers, nearly all of the world’s largest PR and ad firms continue to work with fossil fuel industry clients,” said Jamie Henn, founder of Fossil Free Media, which is spearheading the Clean Creatives effort.

“WPP does business with Shell and Chevron, Omnicom’s BBDO does much of ExxonMobil’s advertising, Ogilvy runs branding exercises for BP. Our campaign will expose the depth and breadth of these relationships,” says Henn.

The campaign will focus on revealing the “intentionally concealed” relationships between PR and advertising agencies and their fossil fuel industry clients.

“Very few agencies openly acknowledge their fossil fuel work on their websites or in their citizenship and sustainability reports, while most tend to evade questions about their industry relationships when asked,” said Christine Arena, former executive vice president at Edelman and CEO of creative agency Generous, who is serving as an advisor to the campaign. “This creates an accountability gap and lack of information that current and prospective shareholders, employees and agency clients need to know.”

Another strategy will reach out to creatives directly, including high-profile directors and artists, as well as running targeted ads on LinkedIn and other social media to find employees who are willing to sign a pledge stating their desire to no longer work with fossil fuel companies.

One participant, Amy Westervelt, host of the popular podcast “Drilled,” released a series profiling the “Mad Men” of PR that served as inspiration for this broader initiative.

The effort will also circulate a business sign-on letter via networks like the American Sustainable Business Council and the Ceres BICEP Network (Business for Innovative Climate and Energy Policy) in the coming days as well as apply political and legal pressure.

“It’s past time for not just truth in advertising, but truth in the advertising and PR business,” said Thomas Oppel, executive vice president of the American Sustainable Business Council.  “For too long, companies, including ad and PR agencies, have compromised the higher motives they publicly proclaim by attempting to hide the catastrophic damage inflicted by fossil fuels and their complicity in covering for this devastating deceit.”

Although the campaign is spearheaded by Fossil Free Media, its growing list of partners includes Hip Hop Caucus, Sum of Us, and the Climate Investigations Center.