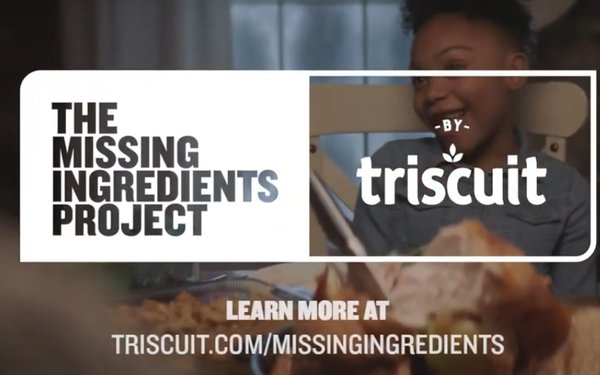 The Triscuit cracker brand has launched a three-year, $1 million initiative to provide grants to nonprofit organizations that can provide fresh, nourishing food to people who live in so-called food deserts.

"The Missing Ingredients Project" kicked off last Sunday with a full-page ad in the print edition of The New York Times, followed on Monday by banner ads on the newspaper’s website.

Topped by the headline “Missing By The Bagful: Nourishing Food,” the print ad explained that more than 19 million people in the United States live in food deserts. Readers could scan QR code in the ad to obtain more information.

Triscuit cites the U.S. Department of Agriculture’s definition of food deserts as  low-income areas where at least 500 people—or at least 33% of the population—is more than one mile from the nearest supermarket, supercenter or large grocery store for an urban area, or greater than 10 miles for a rural area.

A video running on social media platforms describes the ongoing pandemic as a time when “we’ve been missing celebrations, missing milestones, missing each other” while millions of Americans are also missing access to nutritious food.

“The first phase is driving awareness of this new project,” Triscuit senior brand manager Sally Barton tells Marketing Daily. “We’re focused on educating people around the issue and sharing that this is a real issue in America, with over 6% of people living in food deserts.”

“We call them change makers: people who are rolling up their sleeves and getting involved to find solutions to the issue of food deserts across the U.S,” says Barton.

Triscuit is using out-of-home media placements in close proximity to supermarkets in New York City to generate awareness. Ads bear the words “Missing: Nourishing Food” accompanied by the image of a hand holding the outline of a piece of fruit.

“We knew that this is a moment in time when people are very much thinking about food,” says Barton. “We focused it in New York City just knowing that the reach and awareness that we can drive by the population of New York City could be a really efficient way to get the message out at scale.”