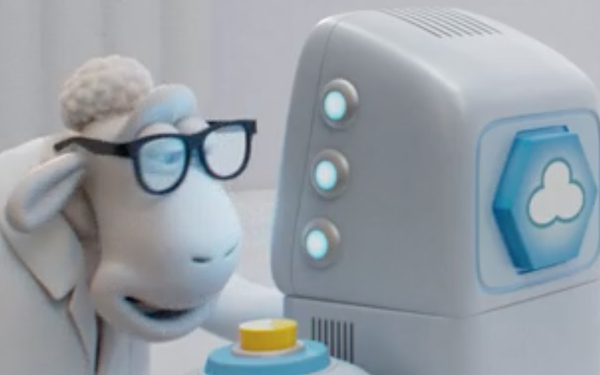 The mattress business may be a jungle right now, but Serta is enlisting some old standbys to soothe people back to sleep. This time, though, its fluffy little sheep are data scientists, turning lab insights into better-tuned mattresses. And this time, the ovines are looking to sell those mattresses direct to achy customers.

The new digital campaign, the first major effort from Leo Burnett since gaining the account, positions the critters as “curators of sleep,” happily cranking out new Perfect Sleeper mattresses in the cloud-filled Sheep Made Serta Factory.

“It was time for the sheep to evolve,” says Lindsey Scales, senior brand manager at the Atlanta-based company. “We wanted to tie them more closely to the positioning, which is to be champions of comfort for all.”

Serta hopes that with their wee lab coats and goggles, the hard-working sheep can better connect with the growing number of online bed buyers.

The ongoing rise of D2C mattress brands, including Casper, Purple, Nectar and Tuft & Needle (which Serta acquired in 2018), is behind the shift in the approach of the 90-year-old brand.

“It’s made us evolve the marketing and strategy of our brand, as well as logistics and operations,” she says.

While Scales declined to say how many of the company’s sales are now direct through its website, “the D2C channel is very important for us, and it is a big focus for growth. We have teams working on how to expand it, and we want to shift our thinking.”

Much of that process has to do with balancing sales of mattresses that can be shipped quickly, as soon as a consumer encounters an ad online, against those made to order, she tells D2C FYI.

The new campaign supports the Perfect Sleeper and is all digital. “In this COVID-crazy year, people spent so much more time on social media and YouTube. So that’s where we are. And when people see our sheep, we want them to think, 'Comfort, comfort, comfort,’” Scales adds.

While Serta has been using the sheep as its chief heroes for 20 years, the company is asking them to face very different battles these days. First, the $17 billion category, infamous for its lack of pricing and manufacturing transparency, continues to be upended by D2C brands.

The Mattress Firm’s bankruptcy in 2018 and closures in department stores also rattled the category's business model.

But the market is even unsettled among newer brands. While the pandemic is causing many consumers to spend more to make homes comfier, it’s also putting economic pressure on many families. Casper, which launched in 2014 and has long been a darling of the D2C world, reports lower sales. Yet at rival Purple, revenue is skyrocketing.

The D2C brands have succeeded by focusing primarily on millennials, Scales says, “and there is still a tremendous difference by age group about willingness to buy online.” For now, she says, the majority of people -- even those who do most of their research online -- “still want to test a mattress out before buying.”

Serta Simmons Bedding, still the largest manufacturer and distributor of mattresses in North America, is privately held. Several months ago, it restructured its deals with lenders, restructuring to reduce $400 million in debt and adding $200 million to the business transformation plan.

For Serta, Scales says the goal “is to bring our industry into this century, and innovate as much as other brands.” And while the tipping point for pricing transparency may have come from other D2C mattress brands, it also reflects a greater demand for honesty and simplicity.

“People need simple step stories,” she says. “We want people to get a good night’s sleep every night. That means replacing your mattress around every eight years, and it’s up to us to make it clear why they should pay more for a better product.”