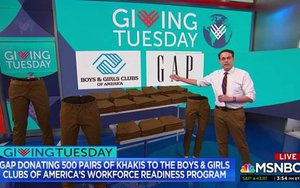 As a tense nation watched election night results, Steve Kornacki’s khakis won in a landslide. Now he and the Gap are paying pants forward with a donation of 500 pairs to the Boys & Girls Clubs of America’s Workforce Readiness program.

Kornacki, a national political correspondent for NBC News and MSNBC, made the Gap’s #GivingTuesday announcement in a segment on MSNBC.

When no clear winner emerged in the presidential contest for days, viewers had plenty of time to mull Kornacki’s hindquarters and style choices, including his preferred “uniform:” khakis, with a rolled-sleeve button-down shirt and tie. New York magazine's The Strategist broke the news that the “Chart throb” buys them at the Gap, giving people a shopping break from the exhausting county-by-county coverage.

In addition to handing out britches in the name of the now-famous “Map Guy,” Gap is also donating up to $50,000 to the workforce readiness program, giving $10 for every qualified #sharethegapdream post on social media.

“It’s been fun to watch fans adoring Steve and his style,” says Mark Breitbard, president and CEO of Gap, in its announcement. “Steve’s sincerity and work ethic won the hearts of Americans and together, we were inspired to support the Boys & Girls Clubs of America’s Workforce Readiness program by providing them with hundreds of ‘Kornacki khakis.’”

Its recent third-quarter results beat expectations, benefiting from a strong performance at its Old Navy division. But results also improved at the Gap flagship, with revenue down 14%, a sequential improvement from a decline of 28%.

Baird rates the company as neutral. But he says he is “warming” to its prospects, in part because of stepped-up marketing investments. And Old Navy and Athleta are “well-positioned, with on-trend casual/athletic assortments, healthy digital business and strong brand messaging.”