The Rightsizing Of The Fox News Base 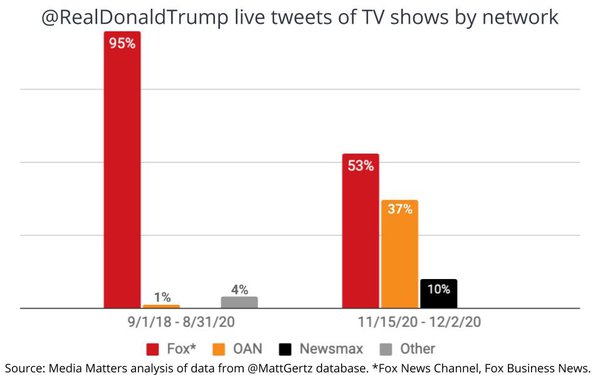 The genius of Roger Ailes -- and much of Fox News Channel's success to date -- was in his understanding of a fundamental principle of branding: differentiation.

And that while extreme, right-wing news, opinion and commentary existed in other media -- principally talk radio -- there was pent-up demand for a network TV news channel providing an alternate reality.

But we're starting to see what happens when a dominant, differentiated brand suddenly gets marginalized by competitors offering even more extreme versions of its product.

Thanks to TheRighting, we've been able to track the ebb and flow of right-wing news fragmentation, as the base seeks even more extreme points of view, commentary and yes, even alternative facts. But what happens when the dominant brand loses its dominant source of promotion? You know, the Promoter-in-Tweet?

Put aside the ongoing speculation that the former President might actually form his own even more extreme variant -- likely a direct-to-consumer premium streaming service -- his turning of the back on Fox News marginalizes the channel among its current base.

“In the short term, this OAN-and-Newsmax feedback loop is likely reinforcing Trump’s increasingly deranged claims that he actually won the election and that the certified election results showing otherwise should be thrown out," says Matt Gertz, senior fellow of Media Matters, who conducted the analysis.

“In the longer term," he continues, "it’s unclear whether or how long Trump will continue this new pattern of media consumption. Already, Fox has aggressively sought to limit the ratings damage by injecting programming from its high-profile opinion hosts into its “news-side” coverage. Over time, Trump -- and his supporters -- could return the network to its traditional dominance in the right-wing media ecosystem."

If not, Gertz predicts his post-presidency could find him "increasingly sucked into OAN’s unhinged fever dreams of shadowy international cabals forever conspiring against him.”

Personally, I'm predicting the latter, because much like Roger Ailes before him, the former reality TV show star/soon-to-be-former-President also understands the value of differentiating your brand, even if it's just plain crazy.

fox news, news, politics, promotion, social media, television
1 comment about "The Rightsizing Of The Fox News Base".
Check to receive email when comments are posted.
Next story loading