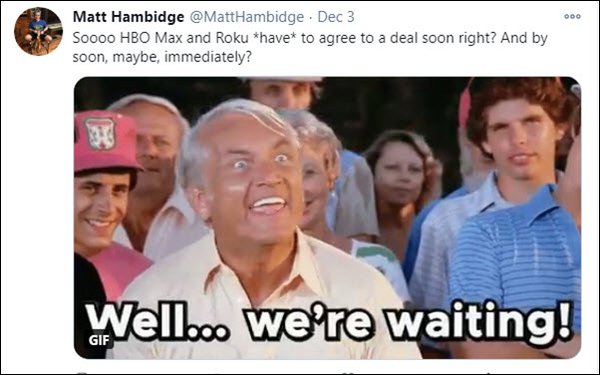 In addition to helping AT&T’s WarnerMedia woo new subscribers for HBO Max, the company’s move to release all movies in 2021 on the streamer simultaneously with movie theaters is upping pressure on Roku to resolve the standoff over supporting HBO Max.

HBO Max launched in late May without support on either Roku or Amazon Fire, which together have a 70% share of U.S. streaming devices, according to Parks Associates.

As news streaming services emerge, the big app distributors and major media companies are wangling over control of customer data and the customer relationship — and, in some cases, over advertising revenue.

WarnerMedia reportedly wants consumers on the Roku platform to use the HBO Max app to access the streamer, but Roku wants to offer access to Max through its own app, as it had done with HBO Now. The companies are also said to be negotiating about how ad revenue will be shared shared once WarnerMedia launches the ad-supported version of Max in 2021.

Now, with HBO Max extending its “hybrid” distribution model not only to “Wonder Woman 1984,” bowing this Christmas, but 17 releases in 2021, pressure on Roku, as the lone holdout, is increasing.

The announcement of that initial month of “free” access has resulted in a surge of social media pleas and angry demands from frustrated Roku users who still can’t access HBO Max.

Prior to the HBO Max deal with Amazon, AT&T CEO John Stankey had noted that a deal with either of the app distributors would likely put pressure on the remaining holdout, and WarnerMedia CEO Jason Kilar had observed that being able to match competitors head-to-head on access to major streaming services could be a key consideration for device makers during the peak holiday fourth-quarter sales period.

Now, Andy Forssell, executive vice president and general manager of WarnerMedia's direct-to-consumer products, has publicly expressed confidence that the company and Roku will come to terms.

"We'll get it done," he told CNET late last week, adding that while he “can’t prognosticate” and WarnerMedia can’t rush a deal, Roku is “a good partner” and “I'm sure we'll continue to be in business with them."