Entertainer-in-Chief Sees Brand Equity Slide In Most Categories, Except One 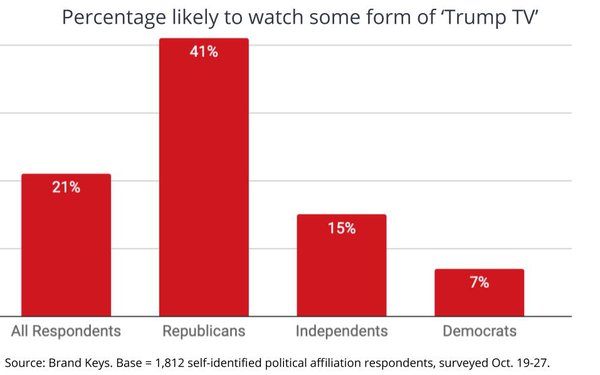 I've always suspected that a great deal of the incumbent President's base is in it just for the laughs. Like a WWE wrestling match, they simply like rooting for sides. And they just love all the performance histrionics pre-, post- and during the match.

The problem is that just like a Wrestlemania match, some spectators believe the competition is real, and not just entertainment value.

As he prepares for life outside the "squared circle" -- er, I mean, squared Oval -- it looks like the former President's future will clearly be his past: a "reality TV" caricature egging viewers on. But unlike "The Apprentice," or even a WWE match, his next act will at least have the pretense of being "real."

Whatever "Trump TV" ends up being positioned as, a sizable audience is already built in for it, according to new research from brand equity tracker Brand Keys.

Based on a study conducted in late October, just before the election, 21% of all respondents said they will definitely or probably watch "Trump TV."

Not surprisingly, that likelihood skews by political affiliation: 41% of Republicans, 15% of Independents and 7% of Democrats.

While these findings may not seem startling, they fail to answer the most important question about the propensity of Americans of any persuasion to watch "Trump TV:" why?

Let's assume some percentage -- let's say a third -- are likely to watch it because they think it is real. That means the rest plan to watch it purely for the entertainment value.

I'm not sure which rationale is worse, but both are dangerous. Those who buy into the reality of "Trump TV" will be buying into what the Ipsos' political research team have dubbed an "alternate reality" that has been contributing to America's political and policy divide.

Those who tune in for the shits-and-giggles won't just be like passersby craning their necks to watch a car wreck, but will actually be contributing to the wreckage by giving "Trump TV" legs. You know, legitimacy as an influential media platform.

Speaking for myself, I never had much use for it, pre- or post-presidency, for much the same reason I never watched "The Apprentice" or the WWE: I don't enjoy watching fake competitions.

But when the thing being faked has the potential to shape our national discourse -- if not our policies and even potentially our laws and governance -- it's not simple entertainment. It's a form of warfare, albeit one that the intelligence community would call "hybrid warfare."

I was struck a few months back when Omnicom's Sparks & Honey unit did a culture briefing on the growth of conspiracy communities like QAnon, and their observation that a significant percentage of the followers were in it just for entertainment value.

How bored and cynical have we grown as a society where a significant number of people sign up for conspiracies just to idle their time?

But there is some potentially positive news in Brand Keys new findings, which is that the Trump brand appears to be wearing out in many other categories. Entertainment aside, Brand Keys found the Trump brand lost equity -- what some people might call added value "lift" -- for 75% of the consumer marketing categories that Brand Keys tracked.

“The Trump brand lost efficacy in a number of consumer categories it once dominated,” says Brand Keys Founder and President Robert Passikoff. “It’s difficult for one brand, even one as strong as Trump’s, to operate successfully in the consumer and political arenas simultaneously.”

Which categories does the Trump brand still resonate in? You don't need to scratch your head for that. Aside from TV/entertainment, they include golf/country clubs, hotels and real estate.