Is This A Dream? Sipping Jim Beam Cocktails In Giant Snowglobes -- In Your Driveway 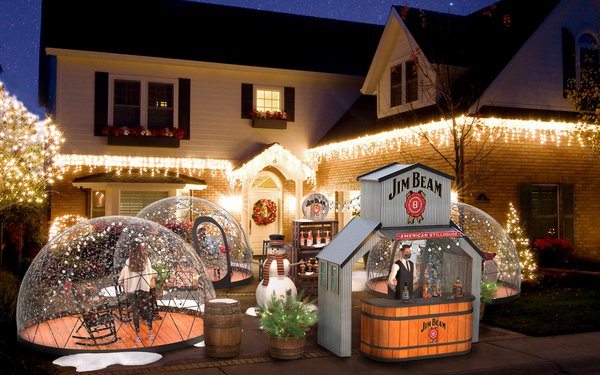 This year’s Fantasy Gifts from Neiman Marcus include the Bowlus Endless Highways Bespoke Performance Edition aluminum travel trailer, with a state-of-the-art electrical system. It’s nice, but at $255,000, it may top out over your budget.

It’s probably much smarter to try your chances to impress with the Jim Beam Snowglobe Experience, which lets you and friends party it up in your driveway inside three festooned snow globes “adorned with elements inspired by the iconic JIm Beam American Stillhouse in Clermont, Ky.” Quality speakers between the globes help make it a party.

The Experience comes complete with a Jim Beam-supplied, “licensed” bartender who will make up to two special bourbon cocktails for each of the people in the globe, while keeping his social distance from all of you. A total of six partiers can occupy the globes.

Can you put a price on something like that? Well, Jim Beam can. It will cost  $17.95 (that’s the year Jim Beam put on its first bottles). Also, because of state laws, you’ll have to pay the price of the Jim Beam bourbon your barkeep will be serving you.

There are details on Jim Beam’s  social media pages and its own website.

Unlike the Bowlus Bespoke Edition, the Snowglobe Experience is truly one of a kind — but you have to win the chance to buy it.

On Thursday,  some time after noon, EST, one Beam Snow Globe Experience will be made available on the Jim Beam e-Store. If you win, the Experience must be experienced between Dec. 17-22, “subject to local conditions and protocols.”

Now, that’s living in a bubble!  The globes are akin to the plastic igloos some restaurants have erected to  let diners stay safe and kind of warm as they eat outdoors in bad weather.

In case you don’t win the chance to buy the Snow Globe Experience, you can still  purchase a holiday-inspired bourbon cocktail kit for $5 on the Jim Beam e-Store. It includes ingredients for some classic cocktails and some winter gifts.

“Here at Jim Beam, we’re all about bringing people together safely and responsibly over a glass of bourbon,” said Fred Noe, Jim Beam’s seventh-generation master distiller, in a statement.  “While we wish we could welcome folks to the Jim Beam American Stillhouse for the holidays, this year instead we’re bringing the spirit of Kentucky to a few bourbon lovers with this.. experience.”

Noe may not have been talking through his hat about that invitation to the Stillhouse. Last October on Airbnb, Jim Beam opened up the rustic three-bedroom cottage, built in 1919, to guests on two weekends. The rooms were priced at $23 a night, which the brand explained is the regular price for a bottle of extra aged Jim Beam Black Bourbon.

The cottage, located on a lake, came with a fully stocked bar, and included dinner from the on-premise Fred’s Steakhouse, which specializes in steaks bathed in bourbon. The offer itself was a earned media success, earning at least 150 news stories, a spokeswoman says.