For 'Good Riddance Day,' Planet Fitness Pinatas Will Flip Off 2020 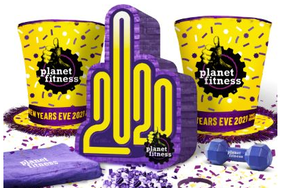 Planet Fitness knows just how difficult this year has been. So as part of its sponsorship of Times Square's famous New Year's Eve celebration, it's offering members a fun way to welcome 2020 -- with a pinata flipping the old year off.

That piñata is also part of the gym chain's partnership with Good Riddance Day, scheduled for Monday, Dec. 28. The event will feature a larger-than-life pinata in Times Square (as well as digital transmission through TSQ.org.)

"It was the perfect fit for us," says Jamie Medeiros, vice president of marketing for the Dover, New Hampshire chain. "We're heading into a new advertising campaign in January that is all about our members breaking free of 2020. For us, the enemy has been the couch. People are feeling stuck in their homes, and we want to get them moving."

The company is selling 100 limited-edition party packs, which include a pinata, Planet Fitness swag, treats, confetti and New Year's Eve hats, priced at $20.21. And 21 pinata-smashers will find a card offering free membership for a year.

"This is just a fun, irreverent way to move on," Medeiros tells Marketing Daily.

But Planet Fitness, with its larger-than-average clubs and better ventilation, is knocking itself out to show patrons how hard it's trying to be safe, says Medeiros. That includes plenty of sanitizing, cordoning off every other machine and offering more than 500 exercises virtually through its app.

"How much faith you have in your club is a huge part of feeling safe," she says. "And our clubs aren't like studios. It's a very different footprint.

The gym chain has more than 14 million members and locations in all 50 states, and about 90% of its clubs are open, Medeiros adds.