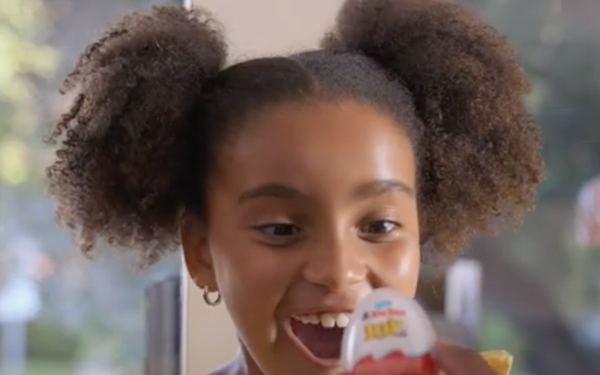 Kinder Joy and Hershey Kisses are sweetening the season with holiday commercials that celebrate the love of family rituals and baking.

Ferrero’s Kinder Joy—whose egg-shaped container houses both a creamy snack and a tiny toy—commemorates the family tradition of marketing a child’s height on a door frame in a spot titled “Doorways to Memories.”

The ad opens with a young boy running to his mother, who holds a Kinder Joy behind her as she makes him stand against a door frame to measure his growth before handing him the reward. The ritual is repeated as the child gets older and taller.

“Even the smallest surprise can make the biggest memories,” the voiceover says as the mom presents her now-teenaged son with a Kinder Joy toy from the past as he heads off to college.

The spot ends with the now-married son and his wife moving into a home and replicating the growth-measuring tradition with their daughter.

“What we’re aiming to do is bring to life and build emotional connections between consumers and the brand,” Kinder North America vice president of marketing Felipe Riera Michelotti tells Marketing Daily. “We can create those unique bonding moments between parents and kids.”

In addition to digital platforms, “Doorways to Memories” is running nationally on television.

“All the digital assets that we have will have the click-to-buy option,” Michelotti adds. “You can see the ad and quickly and easily replicate that experience with your kids at your home just with one click.”

Agencies involved in the campaign are Publicis, Mindshare and Golin.

In a 15-second spot called “Bells to Blossoms,” red and green Hershey Kisses do their traditional bounce-along to the melody of “We Wish You A Merry Christmas.”

A hand reaches in and grabs one of the candies as the video cuts to a father and daughter placing the chocolate treats on top of cookies.