During The Pandemic, Heineken Cardboard Cutouts Mean You Care 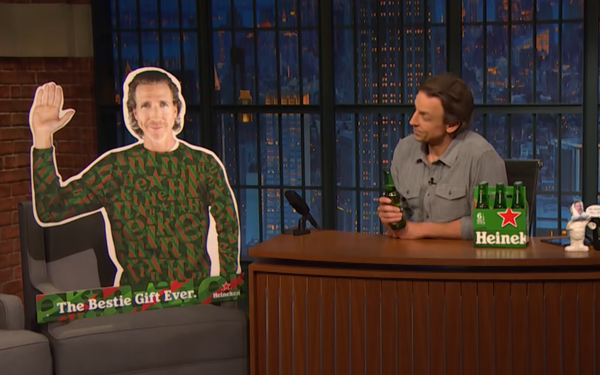 If you can’t see your friends in person, is getting a cardboard cutout of them an adequate substitute?

Probably not. But during a pandemic, maybe letting someone you care about get a paper version of you to have and hold is enough this year.

Heineken seems to think so, as it’s offering a chance to send a giant facsimile of yourself to a loved one.

People who go to BestieGiftEver.com can upload their selfie, add some Heineken-provided digital enhancements, fill out an entry form and cross their fingers, hoping to win the sweepstakes.

If Heineken picks it--the contest rules say it will pick 1,150 first-prize winners--they’ll send a larger cardboard selfie of you (and a six-pack)  to the person you choose. Four other grand prize winners get a $2,500 gift certificate for the airline of their choice so they can visit, in person, later.

“Late Night” host Seth Meyersgot a cardboard cutout from his brother Josh the other night, featured in a video that’s now become part of the earned media Heineken will be adding up. The brand has also enlisted some influencers to spread the word, and they’re talking it up on social media.

On a more practical level, those who don’t win a giant selfie can just add the Heineken holiday-themed filters to existing, smaller selfies and send off an Internet-device sized version of themselves to friends. (All selfies are just head and torso, to be clear.)

“The perfect gift doesn’t come from you,” says a Heineken message on the Bestie entry website. “It is you.”

Given the number of cities that are once again closing up or greatly curtailing bars and restaurants from serving drinks and meals indoors, the idea that cardboard cutouts make the heart grow fonder may be timely and unfortunately correct.

A new clampdown on bars and restaurants starts Monday in New York City, and other versions of that ban exist nationwide.

Like others alcohol brands, Heineken is trying to fit into a familiar milieu that is now more or less closed to them in many places.