Entertainment In The Age Of COVID: A Lethal Pandemic Drama 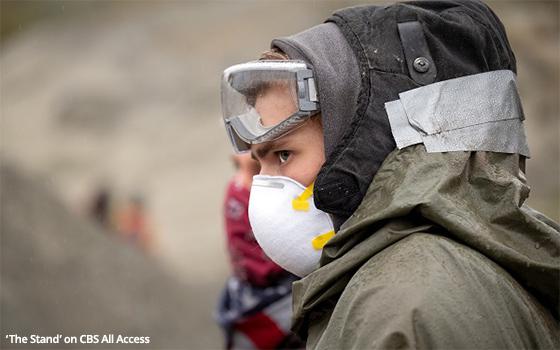 The new TV rendering of the Stephen King novel “The Stand,” premiering Friday on CBS All Access, is a very well-made series that can nevertheless be tough to watch and its timing somewhat less than optimal for some.

Why? Because the novel and this streaming-series adaptation are about a pandemic, although one that is far more serious and lethal than the real-life COVID-19 scourge gripping the planet at the present time.

In “The Stand,” a mysterious virus races through the global population and in a matter of days kills the vast majority of the planet’s residents, leaving only a smattering of survivors who possess a rare immunity to this pathogen.

Why describe “The Stand” as “tough to watch”? In addition to the fact that it is a pandemic drama being presented at the same time as a real-life one, the show’s graphic depiction of this fictional illness and its consequences might prove to be too much for some to bear.

The same can be said for the show’s fatalistic, apocalyptic tone. Given the subject matter, this tone is understandable and even necessary. But as Cheech, or maybe Chong, might have once lamented: “Downer, man!”

The tone is established at the very outset of Episode One when a narrator’s voice has this to say by way of an introduction: “There’s bitter days ahead. Death and terror. Betrayal and tears. And not all of you will live through [it].”

Within a minute or two, we are presented with close-ups of a dead woman’s face with maggots crawling on it, followed by a man puking, also in close-up. And there is more vomiting yet to come in just this one episode.

Despite these images and others like them (or perhaps because of them, depending on one’s taste), “The Stand” gets going pretty quickly and before you know it, you can easily wind up absorbed in its story and wanting to see more.

Perhaps for many it will be easy to separate this hopeless fictional pandemic from the very real COVID pandemic of the present day for one big reason: Here in the real world, we are starting the very hopeful process of inoculating the world against COVID.

In the fictional world of “The Stand,” it is far too late for that since an estimated 7 billion people are said to have died of the fictional virus in the first episode alone.

“The Stand” starts streaming on CBS All Access on Thursday (December 17).