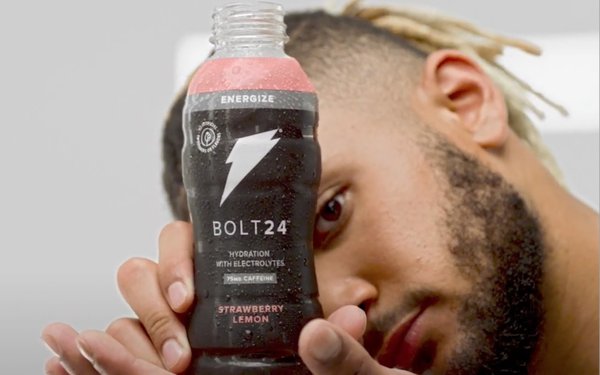 A new campaign for Gatorade’s Bolt24 sports drinks titled “Keeping It Real” targets athletes, while seeking to establish a brand personality separate and distinct from that of the iconic Gatorade.

Three campaign spots debut during the tipoff of the 2020-21 NBA season, revealing a new iteration of Bolt24 called Restore. The product contains 10 grams of the protein collagen and rolls out nationally in February.

“Our focus is how about how do we carve out a unique brand tone and personality for Bolt24,” Nick Lopezzo, director of marketing campaigns for Gatorade and Bolt24, tells Marketing Daily.

The high-profile athletes “fit really well with our campaign thematic of keeping it real. Their personalities are dynamic. They’re bold and transparent.”

When Bolt24 launched in the summer of 2019, it was the first new product line from Gatorade in 20 years. Since then, new entrants have flooded the energy and sports drink categories—making it hard to achieve brand differentiation.

Although Bolt24 sells vitamin-rich, antioxidant- and caffeine-infused Energize and the new Restore, it resides in the sports drinks category as opposed to energy drinks.

Hence the focus on athletes.

“The needs of athletes continue to evolve,” notes Lopezzo. “They’re looking for unique solutions that are made specifically for an athletic lifestyle.”

Nonetheless, each new campaign spot contains “a nod to Gatorade” at the end in the form of a small logo. “We know that people are familiar with Gatorade and trust Gatorade,” says Lopezzo.

In a first for Bolt24, some of the new campaign commercials will run on the online streaming gaming platform Twitch.

Agencies involved in the campaign are TBWA\Chiat\Day, OMD and FleishmanHillard.

Another PepsiCo brand, Mtn Dew Game Fuel, this month launched what it calls a “direct-to-gamer” site where all seven Game Fuel flavors and variety packs can be bought.

“The site will deliver a dynamic shopping experience to our fans and... unlocks an entire ecosystem of value and entertainment,” Nicole Portwood, vice president of marketing for Mtn Dew and Mtn Dew Game Fuel, said in a news release.

Not to be left out, Pepsi just announced the winter 2021 release of limited-edition Pepsi “Cocoa" Cola—a blend of cocoa, marshmallow and cola for a cold variation of the “unofficial beverage of winter.”