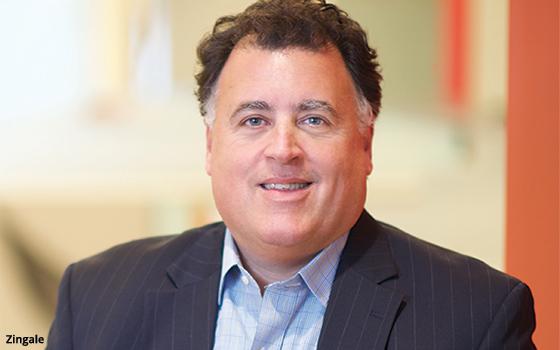 Russell Zingale is a rare combination of business pragmatism and open-mindedness. As a pragmatist, he is always focused on the day-to-day blocking and tackling of media that moves his clients’ businesses — often very retail-focused clients who depend on traffic and sales to remain competitive, especially in difficult times like the ones we have just gone through.

He is open-minded about new ways to achieve those goals including a willingness to test, learn and develop new strategic ways of amplifying the way media works for his clients — whether they are direct relationships with marketers, or indirectly through the independent creative agencies that are an equal, if not core part of, his service mix.

It’s not surprising that Zingale keeps a foot firmly planted in those two worlds, given how his career developed, and especially the role models who mentored him: industry legends Dennis Holt and David Verklin.

In fact, Zingale began his career working for Holt’s original agency — one of the first true independent media-buying services in America: Western International Media — where he learned not just the basics of media buying, and planning and the tenets of reach and frequency, but also a spirit of entrepreneurism that he says was unique to both Holt and Verklin.

After Western was sold by Holt to Interpublic, and subsequently merged into its Initiative division, Zingale says he lost some of that entrepreneurial zeal, so he left to go work for what was the next generation of independent media service, Verklin’s reign as CEO of Carat, where he learned that the game of media services had changed and it wasn’t enough that you could buy media cheaper and more efficiently than the next shop.

“Carat taught me that you needed to have a strategic foundation to win business,” Zingale recalls, adding: “It was about the evolution of strategic media using proprietary research to make media not just more efficient, but more effective.”

During his time at Carat, Zingale also learned about another facet of client service: working directly with other independent creative agencies as partners.

When he joined Carat, Verklin made him head of a new unit, Carat Affiliates, which was focused on bringing Carat’s unique capabilities to other independent creative agencies unaffiliated with the major agency holding companies.

It was a perfect match, and a perfect role for Zingale, because he was able to leverage the entrepreneurial chops he developed with Holt at Western, and use this in a way to grow a new area of business representing creative shops that didn’t have their own internal capabilities.

Along the way, he discovered that those independent creative agency partners — whether they were pitched directly or came in through direct-to-client account wins — were partners in the truest sense, bringing new opportunities for insights as well as leads.

“I like to say that every new agency we work with is a new salesman for us,” says Zingale, who brought the affiliate model back to Holt when he rejoined him a decade ago at his second agency act: U.S. International Media (USIM).

Another thing he brought to USIM was the strategic, proprietary research focus that Carat had ingrained in him, so even though USIM was initially regarded as a “traditional” media-buying shop, Zingale began introducing new and innovative ways of developing a proprietary edge for his clients and affiliated creative shops that were dependent on leveraging unique insights, data and primary research.

When MediaPost recognized USIM as our Programmatic Agency of the Year last year, it was because of some of the methods Zingale championed, including a platform enabling it to target media based on actual trading areas of its retail clients, utilizing data about actual users' travel patterns to and from stores. And then after defining those unique trading areas, finding new ways to analyze media and content to identify which ones were best at reaching and influencing the consumers they needed to target.

That strategy has served USIM and its clients well during a year in which the COVID-19 pandemic disrupted many normal retail shopping patterns and gave his clients and agency partners the ability to remain competitive until shopping behaviors return to normal.

“Everything comes down to reach and frequency and how it delivers your communication goals, but if you can get that down to how it performs for different stores and trading areas, it can make a real difference at a time like this where every dollar has to work harder — when each dollar has to work like $5 or $6.”

Zingale credits Holt and Verklin for teaching what he needs to know and likes to say, “If there’s ever a Mount Rushmore of Media, their faces will be on it.” But to many of his clients and agency partners, Zingale’s face should be on it too.

Zingale isn’t just an ad industry all-star, but a Zingale family one too, as he made a request that we point out he has been married to his wife Jeanne for 33 years and is the proud father of his daughter Alexandra and son Connor.