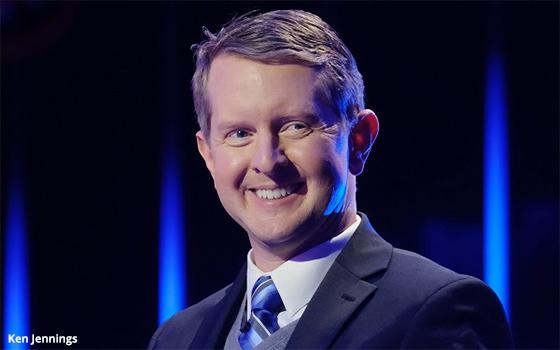 The above headline is simply meant to be funny and not to impugn Ken Jennings, who is no geek.

In addition, the Bible quote that this “geek” headline is based on is about “the meek,” and not a geek. (“Blessed are the meek: for they shall inherit the earth,” Matthew 5:5.)

Despite the fact that some segments of our society still look upon some of our brainier members as nerds and geeks, the appellation above is intended as a compliment. More and more these days, geek is chic.

And if that is the case, no one is more chic right now than Ken Jennings. Jennings is the quiz-show whiz who is known as the Greatest of All Time to ever play the brainy game of “Jeopardy!” And he is now poised for a level of television stardom that is rare for someone of his high intelligence.

Jennings, now 46, first gained fame in 2004 when he put together the longest winning streak in “Jeopardy!” history -- 74 episodes -- a record that still stands.

He then participated in a series of “Jeopardy!” specials and tournaments, winning most of them (one exception, and possibly the only one, was his loss, along with fellow “Jeopardy!” champion Brad Rutter, in a competition with the IBM supercomputer named Watson in 2011).

More recently, Jennings was one of three “Jeopardy!” champions who participated in last January’s “Greatest Of All Time” championship that brought “Jeopardy!” to prime time on ABC.

Jennings won that tournament in a face-off against Rutter and the third most-legendary champion in “Jeopardy!” history, James Holzhauer.

And now, a year later to the very day on which last year’s multi-night tournament got underway (January 7), Jennings is returning to prime time -- along with Rutter and Holzhauer -- to participate in a new prime-time quiz show on ABC called “The Chase.”

In this one-hour show, the three “Jeopardy!” champions are presented as “chasers,” a role in which they will face off against contestants and, if possible, block the contestants from winning any money.

Four days later on Monday (January 11), Jennings will then be seen hosting “Jeopardy!” He will be the first of what the show asserts will be a series of guest hosts who will be filling in for the late Alex Trebek, who died from pancreatic cancer on November 8.

Jennings joined the staff of “Jeopardy!” last year as a consultant. In the wake of that announcement, rumors flew that Jennings was being groomed to take over as the show’s permanent new host in the event that Trebek would become unable to continue.

This has never been confirmed, however. In addition, as of this writing (on Thursday morning), there has been only one unconfirmed report on another possible guest host -- Katie Couric -- and no word on how long we will be seeing Jennings in the host role after his first week (January 11-15).

Meanwhile, this week we are experiencing the final “Jeopardy!” shows that Alex Trebek taped before he was unable to go on. His last one will be seen on Friday.

And next week, a new era begins. While the TV Blog has always tried strictly to avoid taking sides on any number of political and cultural causes or issues, the view from here is that unless he turns out to possess no basic broadcasting skills whatsoever, awarding Ken Jennings with the “Jeopardy!” hosting job sounds like a no-brainer.

May he serve for years to come as a role model to geeks everywhere.

“The Chase” premieres Thursday (January 7) at 9 p.m. Eastern on ABC.