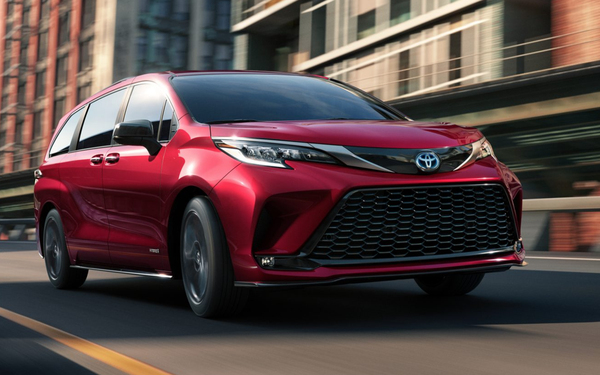 Toyota’s new Sienna campaign is heavy on vehicle beauty shots and light on the physical presence of actors.

Welcome to more of the, dare I say it, “new normal.”

With filming restrictions continuing to make it difficult -- if not impossible -- to show multiple actors in a scene, the automaker  is instead relying on exterior shots of the vehicle coupled with disembodied voices. It’s as if the vehicle is bugged and the viewer gets to hear a conversation without actually seeing anybody.

Once creative shifted from the “we’re here for you” spots of early pandemic in the spring to more or less regular creative by the end of summer, it has been intriguing to see how the automakers handle it. I was expecting to see a lot of masks on actors, but so far, creative has managed to avoid going that route.

In some cases, such as Chrysler’s Pacifica campaign, the automaker used only one actress (Kathryn Hahn) and a limited and mostly remote crew. Other automakers, such as Kia and Nissan, have employed family members who live in the same household off-set to get around masks and social distancing rules.

Toyota's Sienna campaign was developed against Toyota’s long-standing Total Toyota (T2) marketing model, according to the automaker. Even before the pandemic, the automaker made it a practice to create campaigns integrated through one strategic brief, creative idea and media plan.

“Lucky,” one of two spots from Saatchi, features the voices of friends arriving to a concert venue in full VIP style, complete with security waving them to premier parking right outside the backstage entrance.

In “Bold ,” created by Burrell Communications and directed by The Mill, we hear from a hip couple who have opted to take the “scenic route” on a drive through the city, giving everyone else an up-close look at their stylish Sienna.

Conill developed two spots, including “Phone,” where we catch a snipped of a conversation of friends who had ventured to a forest for a remarkable adventure only to swiftly leave as they discover that bears really can be found in caves.

Intertrend created two spots for the campaign including “Marathon,” where a family uses features available in the Sienna to relive moments from their favorite Korean drama. The interior of the roomy vehicle is shown and once again we hear the voices of the family, who are presumably standing behind it.

All the creative is actually pretty clever and a good workaround. To the automaker’s credit, it forces the viewer to focus only on one thing. There are no distracting people with clothes and hair and mannerisms to take away from the real star of the show, which is, of course, the vehicle.