1 Year After Bud Light Launches Hard Seltzer Line, How About A Can of Lemonade? 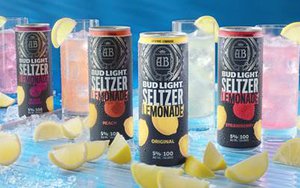 The new Bud Light Lemonade, with 4.2% alcohol content, will be available in black cherry, strawberry and peach blends, as well as just lemonade. It claims to be packed with "bold, bubbly” flavor and contains real cane sugar.

To push the full flavor angle, it’s releasing two ads, in which unthinking grandchildren say Bud Light Lemonade tastes better then their granny’s. The matriarchs overhear those comments and take offense. One punctures a tire on her grandson’s car.  In the other ad, a granny who has heard her lemonade being dissed displays an heirloom necklace to her granddaughter, and then drops it into a whirring garbage disposal.

The ads begin appearing within NFL playoff telecasts this weekend.

In just its first month on the market in 2020, Bud Light Seltzer had  67% name recognition. Ads that appeared for the first time during NFL playoff games probably helped that. But its name recognition was up to 81% by the end of November, according to a Morning Consult survey. Only Zoom, Peacock, InstCart and TikTok did better.

It’s also the only hard seltzer on the list of top 20 brands on millennials' brand consideration list; it ranked 19th, between Dodge and Boost Mobile.

The sparkling cold truth is that hard seltzer sales went wild during the pandemic, up 160% to $4.1 billion by the end of December, according to Nielsen -- twice as much as an earlier UBS revenue estimate for the year.

As many beer sales have flattened or declined, consumers are still joining the seltzer bandwagon. Molson Coors, makers of Vizzy (which added antioxidants to its seltzer), told Marketing Daily last month that there are now 156 hard seltzers on the market, though White Claw claims more than half of the market.

Bud Light claims a 10.5% share of market, which is awesome for just being around a year, but appears to put it just slightly ahead of a gang of others, including Anheuser Busch’s Bon & Viv and Natural Light Hard Seltzer.

Though the appeal is certainly generational -- younger people drink it -- there is a sizable segment of drinkers in other demos. It was also initially thought it would appeal mainly to women, but that split for some brands is a lot closer to 50/50. In any event, it seems headed away from being a fad and toward being a here-to-stay part of breweries that once just made beer.