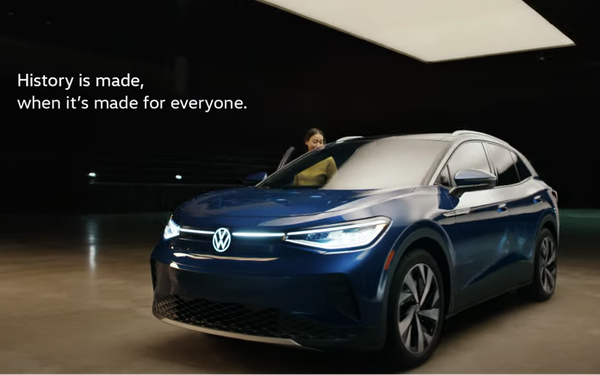 Volkswagen of America uses zoetropes -- pre-film animation devices that display a sequence of drawings -- to show the evolution of transportation, leading up to current day electric vehicles.

“As an uncertain year comes to a close, the message is that history is made when it’s made for everyone,” says Kevin Watkins, creative director of Johannes Leonardo, Volkswagen AOR and the creator of the spot. “[It is] a true statement that could not be more relevant to the current societal climate we find ourselves in, and a reminder that Volkswagen’s ID.4 represents true democratization of electric vehicles to the masses.”

Creative, which was shot in one take, shows representatives of the “stages of man” — each phase growing in size and complexity to indicate an era of transportation and subsequent mass adoption.

The film uses techniques that harness sequences of hand-drawn illustrations, vintage photographs, and unique animations to both give the illusion and history of motion.

Each of the machines highlighted in the film –- zoetrope, phenakistoscope, and praxinoscope, among others -- are their own characters cast as golden pieces of performance-like art, according to the agency. Representations shown via the machines include the first-ever wheel, the horse and buggy and the locomotive.

As the spot begins, the camera moves in one long shot to each machine.

“This is an intentional, cinematic method of storytelling to show the passage of time, and to further point to how each device is a chapter in the larger cumulative story of the history of transportation,” Watkins says.

The spot ends with a woman walking to and getting into the passenger’s side of the electric vehicles, which quickly maneuvers around the zoetropes and drives away. Viewers are invited to reserve the vehicle at vw.com.