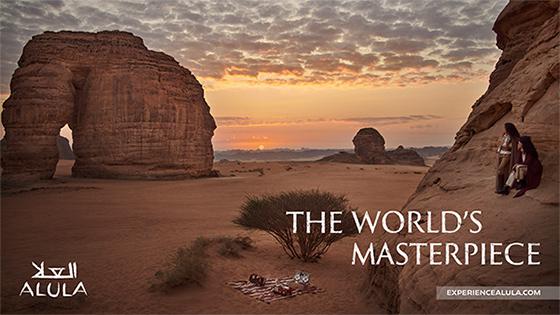 Saudi Arabia’s Royal Commission for AlUla (RCU) is launching the first-ever brand campaign for the newly opened AIUla luxury destination. The locale — reopened in October after being closed for years to most of the world — is considered to be the heritage and cultural centerpiece of Saudi Arabia.

The accompanying ad campaign, developed by Leo Burnett, seeks to leverage this region’s beauty by highlighting several of its treasures under “The World’s Masterpiece” tagline.

The 60-second film anchoring the campaign follows a young Saudi woman reflecting on her time in AlUla and visiting key sites including Jabal AlFil (Elephant Rock). She appears to be astonished at the mirrored architectural wonder, Maraya.

Initially the messaging had been designed for a global campaig, but the pandemic forced a pivot to focus on the property’s domestic market. But the overall tone remains similar because everyone can relate to the area’s natural beauty, explains an agency representative. Its vast and open spaces are naturally appealing in a COVID normal environment.

“We also intended to evoke a sense of nostalgia, self-reflection and an emotional attachment to a person, place or moment – this is something no doubt many people will identify with at the moment,” explains the rep.

In addition to the film, the campaign includes digital, OOH and some print. All messaging is aimed at young, affluent travelers.

The campaign is initially being launched for a domestic Saudi Arabia audience as well as neighboring Gulf Cooperation Council (GCC) countries. While there is no campaign messaging booked for the U.S. yet, American travelers can expect to see a “heightened presence” for AlUla in the region in the future.

Saudi Arabia has big plans to up its appeal to international travelers, notwithstanding pandemic challenges. The region is the first of the significant Saudi Vision 2030 initiatives to entice visitors to visit the country.