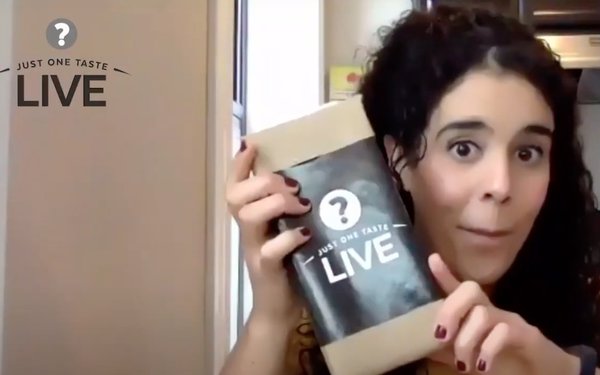 With taste being a major hurdle to consumer acceptance, would you trust unscripted improv actors to “blind” sample your nut-based milk alternative during a Zoom event?

“There was some risk involved,” Milkadamia CMO Christina Downey says of the macadamia-nut-product marketer’s “Just One Taste LIVE” campaign—which was developed to replace in-person sampling sidelined by COVID-19.

The company and its agency, KUZMA&, chose seven actors in Chicago who would receive a box containing unidentified food items and then unpack and sample the contents while being recorded for subsequent public distribution.

The participants are not identified as paid actors anywhere in the video.

"While we hired them, they didn’t know what they were hired for and we didn’t script out any of their reactions. I won’t say I wasn’t anxious,” says Downey.

"We did pay them for their time, much like one pays focus group participants for their reactions," she adds. "Their responses were 100% genuine and unfiltered. We were happy to provide out-of-work improv actors with the opportunity during a time when theaters are closed."

Based on several years of sampling at trade shows and other venues, Milkadamia was seeking to replicate “that small moment that opens up the mind to the possibility of plant-based milks,” says KUZMA& founder Paul Kuzma.

As seen in this video, the actors take one taste of an unidentified liquid and share positive reactions to its smell, taste and texture. Only when they unwrap the container do they discover they’re drinking macadamia milk.

There were three key moments designed into the production, according to Kuzma.

“There was the blind tasting, where they’re tasting something that they don’t even know what it is. Then there was the reveal when they unwrap the product itself, which gave us some really nice moments. The third was the reveal of additional products” in the form of vanilla milk and flavored creamers.

The main platforms for the campaign creative are YouTube and Hulu.

“Just One Taste LIVE” is a humorous departure from recent Milkadamia marketing communications, as in this long-form video detailing the dietary and environmental benefits of macadamia nuts.

Having launched its first product in 2016, the company’s milks, creamers, butters and cooking sprays are available in some 14,000 retail doors nationwide, according to Downey.