Whole World Will Be Watching Our Un-Peaceful Transition 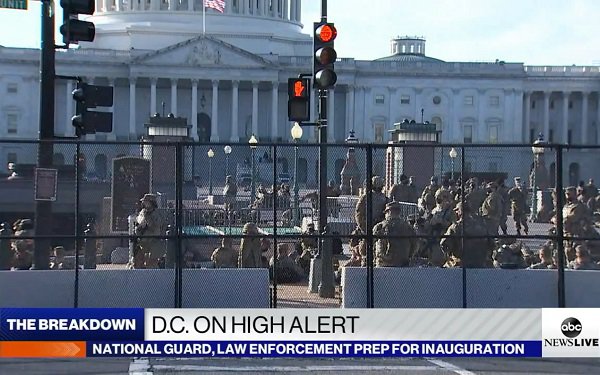 With a plethora of devices now spread throughout the world on which to watch or stream this live event, today's inauguration will be seen by millions in ways and places that were not possible even four years ago for the inauguration of Donald Trump.

The multitudes will tune in to witness this transition of power that some are still laughingly referring to as “peaceful.”

I get it. Americans are justifiably proud of our tradition in which a new president is sworn in every four or eight years in a ceremony that consists of a simple oath taken on a chilly January day in a setting -- the steps of the iconic United States Capitol building (and not, significantly, on the grounds of the White House) -- that is quiet and serene.

But even more than the setting, the swearing-in of a new president earns its reputation as “peaceful” chiefly because the oath-taking has traditionally been attended and witnessed in person, from mere feet away, by various political players who are often bitter rivals of the person taking the oath.

This televised image -- of rivals peaceably witnessing the opposition take power in the United States -- is the wonder of the world.

You might even characterize this tableau as the centerpiece of our “peaceful” transition tradition, which is another reason why today's inauguration will stand in stark contrast to most of the ones that came before it.

As has been pointed out by many ever since Donald Trump made it clear that he has no intention of attending Joe Biden's inauguration, his absence is not unprecedented although it is rare.

His refusal to stand up and serve as a participant and observer of today's transition will rob the telecast of that essential visual ingredient that helps to symbolize America's tradition of peaceful transitions in the eyes of the world.

But even more than that, it is hard to consider this year's inauguration and transition of power as “peaceful” when it will be seen internationally originating from a setting that will look more like an armed encampment than the capital of a democracy famous for its peaceful transitions.

On countless news reports ever since the grotesque invasion of the Capitol on January 6, officials in charge of all of the security preparations leading up to today’s inauguration have been heard over and over again declaring that their efforts are aimed at ensuring that the American tradition of peaceful presidential transitions is preserved.

I get this too. What they really mean is that their miles of fencing, the nearby street closures and the amassing of thousands of National Guard troops are all designed to prevent violence and in so doing, say the architects of all that security, preserve the peace.

However, that would not seem to be the kind of “peace” that our tradition of “peaceful transitions” is really referring to. Or to put it another way, establishing peace by a show of overwhelming force is not really peaceful.

A real peaceful transition would be one that would take place in a city that saw no need to lock itself down like a fortress just to swear in a new president.

Unfortunately, like many people who tune in to auto races on TV to see if there will be a smash-up, many will watch the inauguration today in order to not miss any outbreak of violence.

Let us hope that, for the sake of our country and its democracy, the only thing anyone will see is a new president getting sworn into office with no distractions greater than a few passing birds and the gentle fluttering of flags in a soft winter breeze.

The inauguration of Joe Biden is scheduled to take place at noon Eastern on Wednesday (January 20). It will be aired live on multiple TV networks and streaming platforms.