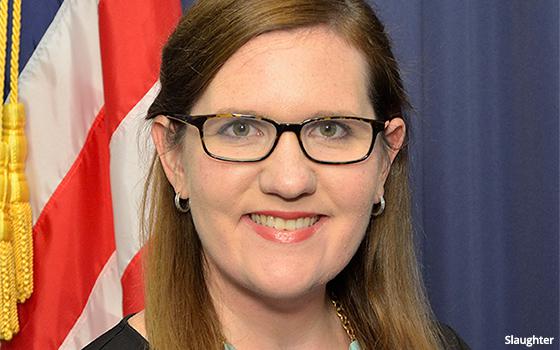 In 2019, she dissented from the FTC's record-breaking $5 billion privacy settlement with Facebook over the Cambridge Analytica debacle, writing that the financial penalty wasn't large enough.

“Injury to the public can be difficult to quantify in monetary terms in the case of privacy violations,” she wrote in an 11-page dissent. “I regard the injury to the public and the institutions of our democracy to be quite substantial.”

Cambridge Analytica, used by President Trump and other conservatives, famously obtained personal data of up to 87 million Facebook users. (The FTC prosecuted Facebook for allegedly violating a prior consent decree by misrepresenting the extent to which Cambridge Analytica and other outside developers could obtain users' data.)

Slaughter also dissented from the FTC's $170 million settlement with YouTube over allegations that the company violated the Children's Online Privacy Protection Act by collecting data from children younger than 13.

That settlement also includes provisions aimed at preventing YouTube from collecting children's data in the future, including a mandate that YouTube require content creators to state whether their videos are directed at children. If so, YouTube won't track viewers with persistent identifiers, or serve behaviorally targeted ads to viewers of those videos.

Slaughter said at the time that YouTube should also have been required to vet content creators' representations.

“Here is the heart of my objection,” she wrote. “The order does not require YouTube to police the channels that deceive by mis-designating their content, such as by requiring YouTube to put in place a technological backstop to identify undesignated child-directed content and turn off behavioral advertising.”

Last September, in an interview for C-SPAN's “The Communicators” series, she expressed interest in investigating the ad-tech industry.

“There's an enormously opaque black box into which our data goes that is turned around and used to target content towards us -- whether it's political, or commercial,” Slaughter said in the interview.

“Never before has there been an industry capable of surveilling and monetizing so much of our personal lives,” Slaughter, along with Commissioners Rohit Chopra and Christine Wilson, said in a joint statement about the study.