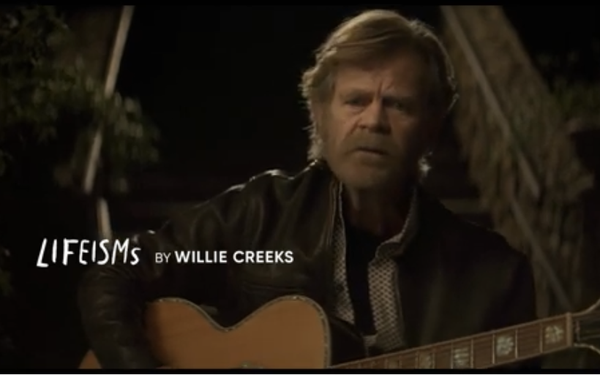 Woody Creek Distillers is out with a new campaign featuring actor William H Macy who is also an investor in the brand.

Macy is “all-in” with his support as he once again steps into the shoes of his musician alter ego Willie Creeks to offer his unusual life lessons.

The new creative, developed with agency partner StrawberryFrog, portrays Creeks as he drops “Lifeisms,” such as he was “fired once” but then got a “part-time job doing whatever the hell” he wanted to. He also cautions to make sure the ladder of success is attached to the “right roof.” These ads end with the tagline, “Age like a Badass.”

See the ads here and here.

The messaging strategy is designed to serve as counterpoint to the typical youth-focused alcohol ad. “We feel that ageism is an important social issue that hasn’t gotten a lot of attention,” says Tyler DeAngelo, executive creative director, StrawberryFrog. “The aging process is in part what gives Woody Creek whisky and rye its distinctive character and taste. They know better than most that aged whisky tastes better than the fountain of youth.”

In addition to the ads, Woody Creek is also launching a full-length music video appearing via Pandora and Spotify.

“Music was chosen because of Bill's passion for music, he has played the Ukulele for years,” says Angelo. “We also picked this angle because music is a powerful way to convey an attitude and build real fans and give us a way to reach people we wouldn't have the opportunity to otherwise.”

Last July, Woody Creek first partnered with Macy on the music video “Why I Put My Pants On” that featured Macy channeling the Creeks character as he croons a tale recognizing those stepping up during the COVID-19 pandemic. The film was shot on an iPhone by Creeks in the same town as the Woody Creek Distillery, Woody Creek, Colorado.