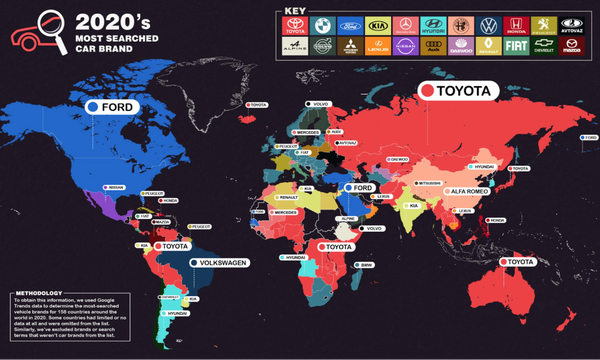 Sorry BMW, Toyota has zipped past you, at least in terms of the Google search box.

After dominating Google search terms in 2019, BMW has fallen back into second place, and Toyota has reclaimed the title of the world's most-searched car brand in 2020.

According to data analyzed by Compare the Market, the last three years have been a battle between Toyota and BMW, with Mercedes-Benz taking third place each year.

The data reveals the search results from 158 countries across 2018, 2019 and 2020. The most recent set of data shows Toyota was the top-searched brand in around a third (34.8%) of all countries analyzed, which is a considerable improvement from 17.7% the year before. Search volume for the automotive manufacturer across 2020 was circa 88.02 million.

MediaPost’s Laurie Sullivan, who covers search marketing, points out that the data is a little skewed. “Someone in Russia would likely first use Yandex, rather than Google, to search for a car brand,” Sullivan says.

In any case, Toyota announced and released an extensive range of vehicles in 2020, which could contribute to it taking the lead. New model releases such as the GR Yaris, Corolla Cross compact SUV and the C+pod launch all took place throughout last year.

Another factor could be that the pandemic is prompting customers to seek out the familiar and the safe, per a study from Deloitte. Perhaps a BMW might be considered too risky a purchase given the continuing unpredictable economy and the fear of potential loss of job/income.

A study from Insurify lists the Ford F-150 and Honda Accord as the most popular vehicles currently in the United States.

Despite only holding first position in 2019, BMW is still the most-searched car brand when analyzing the three-year period. It accounts for 38.3% of all top searches, compared with Toyota’s 31.3%.

Toyota wasn’t the only brand that saw a boost in popularity in 2020. Partly due to BMW's experiencing a significant dip in search interest, brands such as Kia and Ford showed increases, ranking fourth and fifth respectively, sitting just below third-place winner Mercedes-Benz. Both Kia and Ford shared last place in 2019, each appearing number one in only a single country.

While these stats are interesting, the bottom line is, an increase in searches for a vehicle brand doesn't necessarily equal a rise in sales.

Overall, automakers are hoping there will be pent-up demand in 2021 once the COVID-19 vaccine becomes readily available and the economy stabilizes. But that remains to be seen.