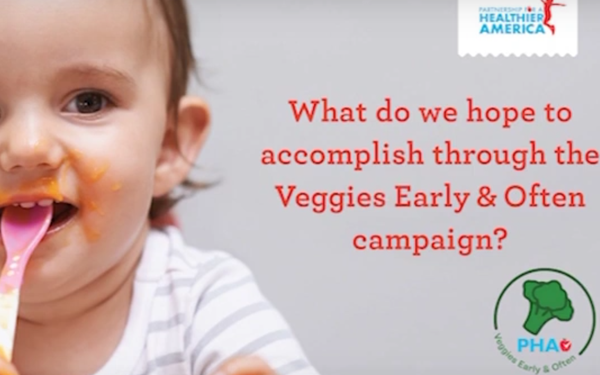 The nonprofit Partnership for a Healthier America wants food companies to embrace new guidelines that exclude adding sugars to vegetables for babies and toddlers under its new “Veggies: Early And Often” icon.

The overarching theme of the campaign is that it’s healthier to get children used to the taste of vegetables themselves, as opposed to mixing sweeteners into veggies.

It’s based on federal government dietary guidelines released last month that recommends sugar not be added to food marketed for consumption by kids under two years old.

“Ultimately, our goal is to shift the conversation from one that claims kids don’t like vegetables to [the idea that] kids can learn to love vegetables.”

The broccoli-adorned “Veggies: Early And Often” icon will be “a reliable indicator for parents and consumers helping them to differentiate which vegetable products actually contain meaningful amounts of vegetables," says Roman.

“When we started the business, our focus was on never masking vegetables,” Sorrosa tells Marketing Daily. “People were looking at us like we were aliens. They couldn’t grasp the concept of a child eating beats seasoned with thyme, or roasted bell pepper strips.”

As Fresh Bellies expanded its offerings beyond infants to toddlers in 2019, its retail distribution expanded from 200 stores to 2,000. Aided by the pandemic, it’s now in 4,000 stores.

“There has been a change in the market in what families are looking for,” says Sorrosa.

This week, Fresh Bellies will launch garlic-, mushroom- and sage-enhanced snacks called Groovies—the base ingredients of which are the gluten-free grain sorghum and vegetables -- “the first time that these two ingredients merge into the toddler/preschooler space,” says Sorrosa.