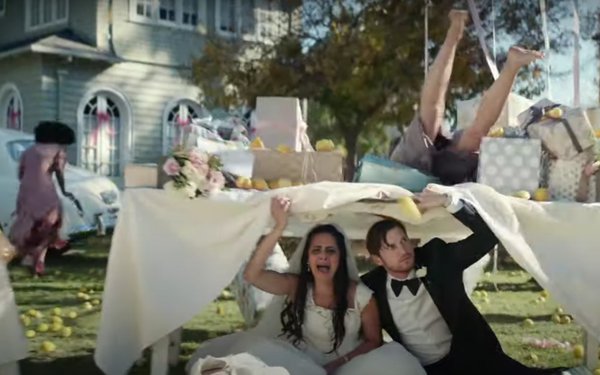 As has been widely reported, 2020 was not a very good year, what with people getting sick or dying, or losing their jobs or businesses, or fighting each other over race and politics.

These conditions may have suggested a handy theme for the Super Bowl ad from Bud Light’s new Seltzer Lemonade.

“When did Bud Light Seltzer start making lemonade?” a newcomer to an outdoor party asks, standing by a tub of cans of the stuff on ice. The response comes from a weary-sounding woman nearby: “Probably when 2020 handed us all those lemons.”

Right about then begins the vignettes of events big and small ruined by lots and lots of lemons falling fast and hard from the sky: at Major League baseball games, at a glass atrium in an airport terminal, at busy intersections, and at an outdoor wedding.

If some big boss at Anheuser-Busch commanded, “Let’s hit people in the head with the fact we’re making a new Bud Light Seltzer Lemonade" -- well, that executive has very compliant (and very literal-minded) employees.

Near the end of the commercial, a party-goer says, “Well, you know what they say, ‘When life gives you lemons. . .” and gets stopped halfway through. “We know the saying, Mark,” a woman says lemon-tartly.

Bud Light will keep the lemon-as-metaphor theme going through the game. When there’s a turnover by either team, fans can enter to win a chance to win a case of the new seltzer, which was introduced earlier this month, by tweeting with the  #LemonsIntoLemonade or #Sweepstakes hashtag.

As it turns out 2020 wasn’t all that bad for the Bud Light nameplate, in part because it successfully introduced its hard seltzer product with a flight of TV ads during the NFL Playoffs and last year’s Super Bowl. In a year, Bud Light Seltzer  captured 10.5% of the hard seltzer category, though it still trails White Claw and Truly, which dominate the market. Truly grew in 2020 because it started its own hard lemonade offshoot, which took off, and has that much of a headstart over Bud Light.