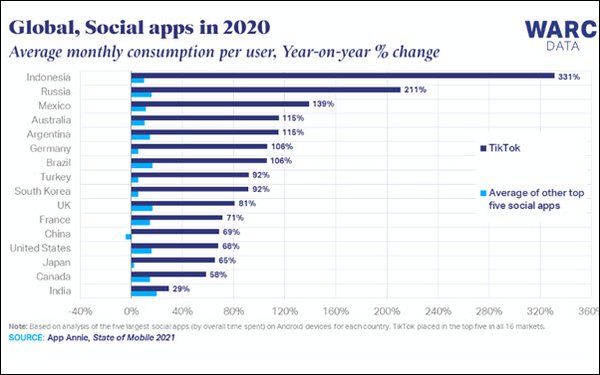 TikTok’s monthly consumption per user nearly doubled in 2020, growing by 94.1% year-over-year across 16 countries, including the United States.

In comparison, the other top five largest social apps averaged consumption-per-user growth of just 11%, according to a WARC analysis of App Annie data on Android mobile devices.

In the U.S. and seven other of the countries analyzed, TikTok is now the social app with the highest user activity — overtaking Facebook in Canada, France, the U.K. and the U.S.

TikTok placed in the top five apps by user activity within each country across all 16 markets.

TikTok's 2020 growth in users and activity is likely to last continue this year, according to WARC.

Fully 44% of the more than 1,000 global marketing executives WARC surveyed in November said that they plan to spend more on the short-form video app in 2021, making it the fourth most in-demand platform, ahead of Facebook.

TikTok has had success with social commerce in China, and its  expansion of commerce into other markets is likely to draw even greater advertising spend.

“This adds pressure to other major social platforms,” the researcher notes in its Global Marketing Index report. “Some argue that TikTok is the next stage of social media, above and beyond Facebook, providing a more creative and spontaneous way for audiences to express themselves.”

Of course, although its arch nemesis ex-President Trump is now out of the way, TikTok’s future in the U.S. remains to be determined.

President Joe Biden’s administration has indicated that it will continue to stand up to China on trade and human rights issues, while seeking cooperation on climate change and other issues.

And while Trump’s approach to TikTok was — like his approach to pretty much everything — dramatic and personalized, Biden’s approach is likely to be more rational and systematic, say some experts.

Lindsay Gorman, a fellow for emerging technologies at the Alliance for Securing Democracy in Washington, told Bloomberg that, rather than defending Trump’s executive orders on TikTok and other China-owned apps like WeChat and Alipay, Biden might pursue wider-reaching policies — for example, establishing a broader framework for addressing digital risks and possibly including allies like India and the EU, which are also scrutinizing TikTok.