What The Hell Is This? Underworld Reimagined and Rebranded 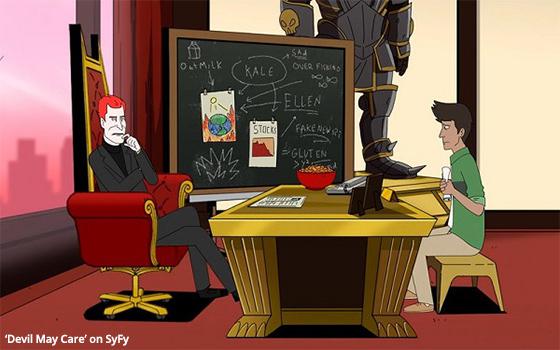 Hell had an image problem, so a forward-thinking CEO -- actually the Devil himself -- took up the task of reimagining, rebranding and remaking the fiery realm of the eternally damned into a world that -- voila! -- is not too different from our own.

In a nutshell, that is the premise of a new short-form animated series titled “Devil May Care” that premieres this coming Saturday night at midnight on Syfy.

This cartoon show -- whose episodes run about 11 minutes or so -- poses an eternal question: If you were assigned to craft a new image for Hell, what would you do?

In the show, the answers can be found visually embedded all over the place. The show presents Hell as a decidedly urban scene. It is a big city with coffee shops and stores, trash piles here and there, a couple of dark alleys and an array of outdoor advertising.

One billboard seen for a millisecond or two in the series’ first episode advertised a fictional brand of chips featuring the tagline: “Now with Olestra!” Just below that billboard was a large food store named Kaletown.

Other images briefly glimpsed throughout the show round out this show’s picture of Hell as a modern-day urban landscape in which everything we intensely dislike or cannot understand in our living world exists in this new Hell for us to encounter throughout eternity.

“The coolest stuff ends up in Hell so why not enjoy it?” the devil asks rhetorically when explaining his vision of the new Hell to a new underling.

The newbie is seen in the photo above sitting across the desk from this literal boss from Hell. Among the scribblings on the chalkboard between them are phrases indicating ideas not yet formed but due to be discussed, including “Fake news??” and “Oat Milk.”

Not seen in the photo: A group of framed pictures on the Devil’s office wall -- one of which is a portrait of Barney the Dinosaur.

The aforementioned newcomer to Hell is a Millennial named Beans who seems to have been maneuvered into Hell (following a sudden, fatal bus accident) by the Devil himself, who seeks the young man’s assistance in burnishing the Devil’s image and presence on social media.

This storyline reaps dividends in Episode 2 when Beans creates a new social-media site and then posts a video that goes viral and makes a star out of another one of the Devil’s aides -- none other than the late President William McKinley, whose position in the governing hierarchy is Devil’s Advocate.

With its vision of Hell as an after-life destination that is almost the same as the place we just left, “Devil May Care” is really saying that we do not need a concept of Hell at all, since we are already living in one -- satirically speaking, of course.

“Welcome to Hell: A Wicked Good Place to Live,” reads a sign seen in the first episode on the road to Hell. No mention is made of the material used to build this road to Hell, but let us just assume it is paved with good intentions, and leave it at that.