Bud Is A Big Pre-Super Bowl Social Winner, Despite No In-Game Ad 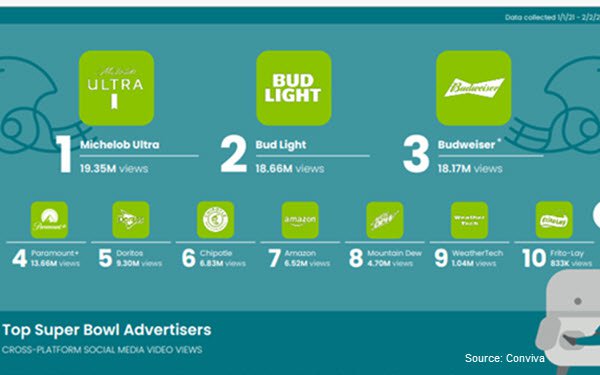 On Jan. 25, Budweiser — one of the several major brands not running in-game Super Bowl ads this year — posted a video ad on all of its social channels explaining that it will instead invest in supporting COVID vaccine education.

Since then, the ad, called “Bigger Picture | Budweiser Super Bowl Commercial" (below), has drawn more than 18 million views across YouTube, Facebook, Twitter and Instagram. Only Michelob Ultra and Bud Light, which are running in-game ads, have pulled more pre-game views across those platforms, according to social media Super Bowl preview data gathered by Conviva between Jan. 1 and Feb. 2.

Further, on YouTube and Facebook, Budweiser is outperforming all of the brands that paid for in-game ads. (As of the morning of Feb. 4, the ad is showing 9.95 million-plus views on Bud’s YouTube channel alone.) It also ranked fifth in views on Twitter.

The brand’s non-Super Bowl ad “has all the hallmarks of a Super Bowl ad, with the important distinction of when and where it’s playing,” notes Conviva’s, which calls Bud’s decision to sit out the game and focus on an important cause “smart marketing.”

“There is clearly a method to Budweiser’s madness,” points out the report: Recent research using the tech firm’s Viewer Insights feature found that brands’ social media content with a social justice or vaccine/COVID awareness element averaged a 59% better engagement rate across Facebook, Twitter, YouTube and Instagram compared to all content posted from brands between Jan 1-20 this year.

“While these brands may not be getting the 100 million eyeballs on Super Bowl Sunday, they are getting excellent return on investment in awareness and reach by strategically ‘sitting out’ but staying in the game on social media,” the analysis concludes.

Conviva included non-in-game-advertiser Bud in several infographics comparing social views for the “top Super Bowl Advertisers” to make the point. The one at the top of this page shows its views performance across all of the major social platforms. 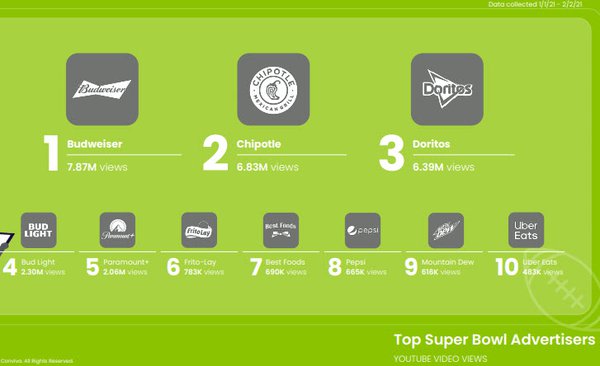 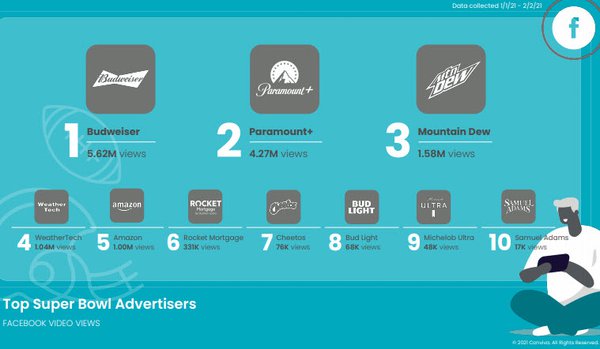 Bud didn’t make the top 10 for views on Instagram (Paramount+, Amazon and Cheetos were the top three).

social media, super bowl, video
1 comment about "Bud Is A Big Pre-Super Bowl Social Winner, Despite No In-Game Ad".
Check to receive email when comments are posted.
Next story loading