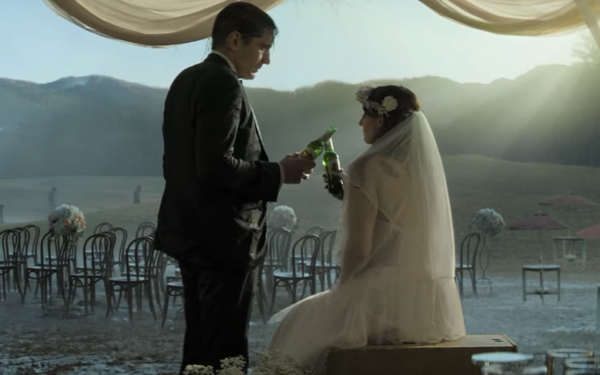 Budweiser brand beer isn’t advertising in the Super Bowl, but the best-selling or fastest-growing brands from Anheuser-Busch are.

Now, A-B has finally released a corporate image ad -- said to be its first ever -- that will show up during the big game, with Oscar-nominated director David Fincher as executive producer crafting the statement about how Anheuser-Busch fits in the big picture.

The takeaway message in this 90-second ad is: “It’s never just about beer. It’s about being together.”

As presented in “Let’s Grab A Beer,” that togetherness is seen through vignettes that often seem sad -- or at least, sobering. Among them:

A couple sharing a beer while staring at the field where their beautiful outdoor wedding site just turned into a rainy mud puddle; a co-worker consoling a cubiclemate hauling the box containing his desk belongings out the door; friends making comforting gestures to a mourner at a funeral; a couple of millennials glumly recalling a good friend in the past tense; and a fellow offering a beer to his friend who just got sprayed with icy slush by a passing car.

When is happy hour again?

The ad seems to be saying that if people are sad, anxious or stressed-out, well, that’s the time for a drink. That message could also be behind the big growth of bubbly hard seltzers in fruity flavors- -- even lemonade. Judged by this ad, Anheuser-Busch’s beer is carrying the weight of the world on its brown glass shoulders.

Then again, maybe the message is wistful and happy.

“In the end, this ad is really about the role the beer category plays in people’s lives. Now more than ever, it’s become clear just how much people miss getting together,” said Marcel Marcondes, the chief marketing officer at Anheuser-Busch, in announcing the spot. “As the leader in the beer category, we felt the responsibility to tell that story.”

The ad was created by Wieden+Kennedy, where Karl Lieberman, the chief creative officer, observed that it’s the little moments when a beer feels just right. "Many of the most profound conversations and experiences we have actually happen on a random Tuesday over a beer.”

For the beermaker, this Wednesday seemed pretty important, too. Along with the ad, Anheuser-Busch also announced a $1 billion, two-year capital expenditure program across 26 states. It says this will enable the company to expand U.S. operations and make sustainable innovations, including a big project to install more solar panels and water treatment facilities.

“These investments are immediate and happening now,” said Michel Doukeris, CEO of Anheuser-Busch. “Right now, our big dream is the recovery of our country.”