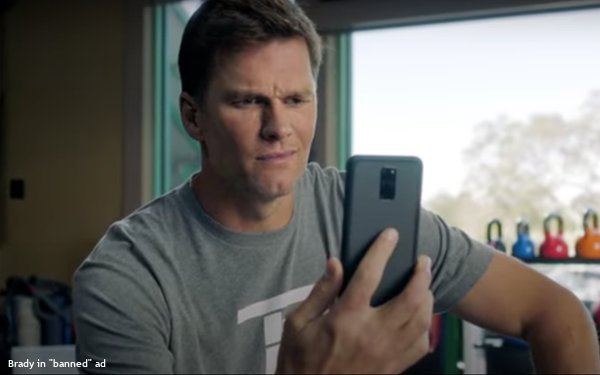 Commercials  allegedly “banned” from the Super Bowl are, by now, a regular event, one which occurred again for Super Bowl LV in Tampa Bay.

This time, T-Mobile made the claim that the “official telco sponsor” -- that would be Verizon -- was preventing the company from showing a humorous ad featuring legendary quarterback Tom Brady and one of his favorite targets, Rob Gronkowski.

The actual story may be a lot less than meets the eye, or publicists’ imagination. But as in the past, ads that are reportedly bumped from the game get amply covered in the media anyway and passed around on social media.

Speaking on background, an executive familiar with the ins and outs of NFL and Super Bowl advertising rules says T-Mobile couldn’t have been very surprised about what happened.

T-Mobile has advertised for eight years in the Super Bowl, and it has two one-minute ads this year -- at a price of $20 million. “Clearly they know how to adhere to the rules,” said the source, who suggested this “banned” ad was knowingly destined to be rejected and lead to T-Mobile’s manufactured outrage.

In the commercial, Brady and Gronkowski, both veteran stars who were at the end of their contract with the New England Patriots after last season, are shown in a flashback video call taking place “one year ago.”

After leading the Patriots to a record-shattering six Super Bowl championships, Brady asks Gronkowski for career advice.  The tight end advises him to quit and chill in Florida.  “Retiring is like winning another one,” he says.

But because of a bad cell phone connection, Brady hears Gronkowski telling him, “Just come to Florida and win another one.”

In the next scene, with a date at the bottom of the screen reading March 17, 2020, Brady is in a press conference with reporters, telling them he’s coming back.

“My goal is to win one more, and Gronk’s coming with me!” (In fact, Brady officially  announced he was leaving the Patriots that day. And he did join a Florida team, the Tampa Bay Buccaneers, and he's now back to the Super Bowl.)

Those scenes apparently fly too close to Brady and Gronkowski’s real stories.

The difference is “a little nebulous,” the source says, but it matters.

On the flip side, in a more successful use of celebrity players, ads for State Farm Insurance featuring quarterback Aaron Rodgers and Patrick Mahomes emphasize their celebrity, but not really their on-field success.

T-Mobile showed off the Brady ad on the “Today” show on Friday and  began tweeting out news about the ban early on Friday too.

“This ad will not air on Sunday.  Why was it banned?" a tweet read, with a link to the commercial.

A T-Mobile spokeswoman said, “Even after making initial edits -- namely  not referencing Tampa Bay, removing words like ‘championship’ -- all of which we did -- we were informed the spot was banned, referring to the ‘protected teleco rights holder.’ We’ve never had a spot rejected in all our years as an advertiser!”

It’s been widely reported that Verizon pays $300 million a year to maintain its status as the league’s official teleco partner, and that kind of money buys influence.

Asked, hypothetically, if Verizon could have produced virtually the same ad without a problem, the source responded,  “Absolutely, 1000%. This isn’t Verizon shutting down a T-Mobile ad. What it is, quite honestly is basically the rights an NFL partner has. When you have those rights you can create content that is more ‘official,’ if you will.”