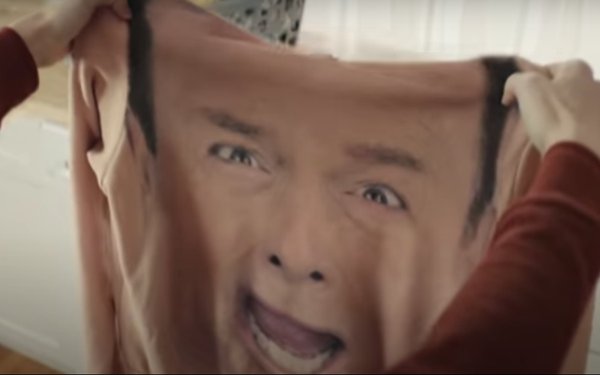 It might not have been the Super Bowl with the most memorable commercials, but the Tide spot featuring a much-abused Jason Alexander sweatshirt received positive feedback in various day-after critiques.

And now Tide is offering viewers a chance to win that sweatshirt by contributing to two social causes, which allows entry into the sweepstakes.

If you missed the spot, officially for the Tide Hygienic variety, it starts with Mom entering her son’s bedroom, and telling her son, “Hey, you’ve got to wash Jason Alexander hoodie.”

The boy glances around and sees the shirt, featuring a larger than life-size image of the former “Seinfeld” star, tossed on a bedroom chair.

“That looks clean to me,” he tells Mom.

In quick flashback, we see glimpses of what it’s been through: drooled on by the family dog, used as the first bag substitute during a baseball game, sat upon, stuffed into a stinky gym bag, and used as a rag to wipe the bugs off the family car windows.

In every scene, Alexander’s expression changes to fit the horror the hoodie is enduring. It’s a familiar sight for "Seinfeld" viewers, who often saw Alexander’s George Costanza  exasperated by women, bosses, friends, his parents -- and life itself.

The ad was one of just a handful from the Super Bowl that received strong approval on various news services. The Kellogg School of Management at Northwestern University also put the ad in its top 10, based on specific factors on its ADPLAN system: Attention, Distinction, Positioning, Linkage, Amplification and Net Equity.

By Monday morning, Tide had posted an online invitation asking consumers to donate to help two charities, Feeding America, the hunger relief organization and Matthew 25: Ministries, for the chance to get their hands on the hoodie. All contributions made before midnight Wednesday will be evenly split between those charities.

Alexander told Variety he had to pose for as many as 1,500 photos of himself reacting to icky situations, but doing so without moving his face.