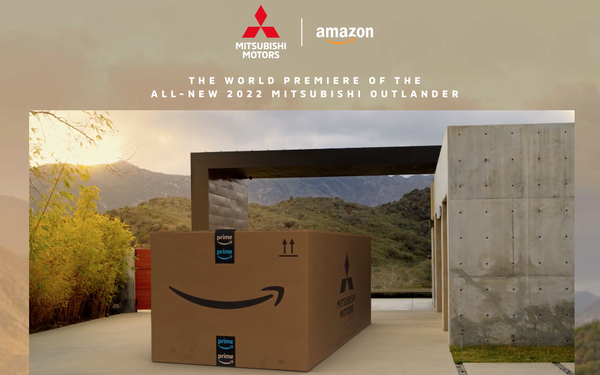 Mitsubishi Motors North America is partnering with Amazon to unveil the 2022 Outlander on Feb. 16.

A place holder page including a teaser video and countdown clock marks the Amazon page where the event will livestream.

Developed under the ideal "I-Fu-Do-Do," a Japanese term that means "authentic and majestic," the all-new Outlander demonstrates strength and quality from the inside out, according to the automaker, which has been without a CMO since Kimberley Gardiner left the company in November.

"The debut of the all-new 2022 Outlander caps off the reimagining of the entire Mitsubishi Motors lineup in the United States," said Mark Chaffin, chief operating officer for MMNA, in a release.

Mitsubishi Motors will give away a vehicle as part of the launch. Entries may be placed either through the link at www.mitsubishicars.com or on www.amazon.com/MitsubishiOutlander from Feb. 16  to March 31.