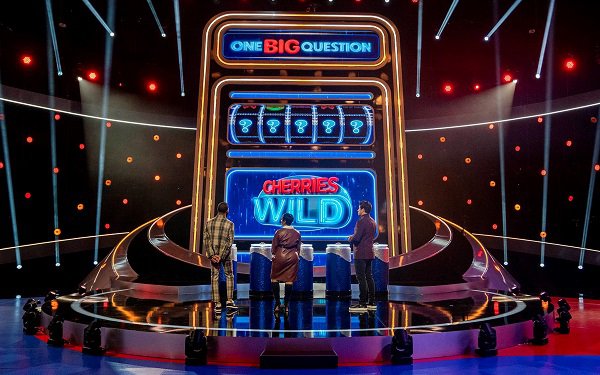 This happens to sound an awful lot like “The Joker’s Wild,” a show that first came to TV in 1972 and has been redone a number of times -- most recently on TBS with Snoop Dogg hosting it.

The title of this new slots-and-trivia game refers to both the cherry icons that are a common part of the slot-machine gaming experience, and also to Pepsi Wild Cherry, a beverage brand that collaborated with Fox on the mounting of this show.

In the premiere episode of this fast-paced trivia quiz show that the TV Blog watched this week, the Wild Cherry brand was mentioned on the show only once by host Jason Biggs (unless I missed some other mentions). Perhaps the brand has a higher profile during the show’s commercial breaks.

One of the gimmicks of this TV game show is that it comes with a companion game that allows users to play along with the show’s contestants via a “Cherries Wild” mobile app.

The game shown on TV is a noisy affair. Everyone -- including the host, contestants and studio audience -- have apparently been coached to scream at all times at the top of their lungs.

At the center of the whole thing is a giant slot machine (or reasonable facsimile thereof) that is said to be three stories high. Perhaps this thing is so breathtaking to behold in person that it is impossible for anyone to mask or tamp down their excitement.

Just as vital to this game are its trivia questions, which range in difficulty from “Easy” to “Very easy.” Let us just say that no one is likely to confuse this show with “Jeopardy!” any time soon.

A couple of sample questions from the series premiere: “Fact or fiction: [actor] Ken Jeong is a real-life doctor.” Answer: Fact.

And another one: “Fact or fiction: Will Smith did all his stunts in the ‘Bad Boys” movies.” This is fiction. To most of us, it would seem pretty obvious that Will Smith would not risk life and limb by personally involving himself in the action sequences in the “Bad Boys” movie.

In another series of multiple questions, the contestants were asked to pick the name given to the rabid fans of various music stars.

When it came to the Grateful Dead, one contestant wrongly chose “Skeleton Squad,” instead of the correct answer: “Deadheads.” At such moments, an older person thinks to himself: Don’t younger people know anything?

In this debut episode, the contestants -- a likable married couple -- got a number of these questions wrong. Nevertheless, they won an amount of money in the six figures anyway.

In this outcome, they were apparently very lucky because -- as anyone knows who has ever played a real slot machine -- winning anything is difficult, but mindlessly feeding coins (or a credit card) into a slot machine is very, very easy.