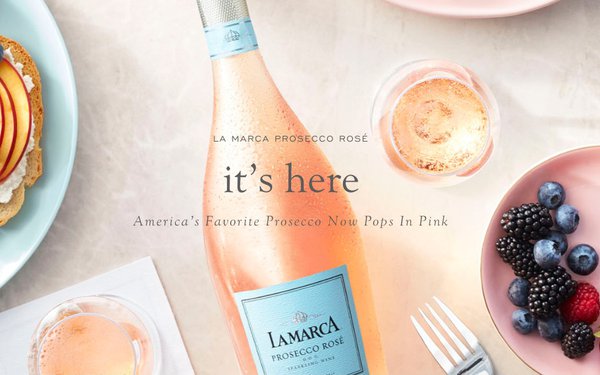 On Valentine’s Day, what many couples want to know about each other is: Do we have a future?

And this year, no alcoholic beverage answers that question more clearly than a bottle of Prosecco rosé -- a brand new marketing spin on the Italian sparkling wine that many oenophiles and marketers are saying will be the next big thing.

Not only is Italian Prosecco rosé new, it has been -- until now -- a forbidden, unthinkable alliance of two sweet ideas finally allowed to come together.

(To be clear, there are plenty of Prosecco rosés from California and other places already on the market.)

Said Food and Wine magazine last year: “Looking back on the 2010s, two of the top wine trends were increased appreciation for both Proseccos and rosé. However, though the two may live together in our memory, technically, they were never allowed to mingle.”

That’s because until last May, the Italian government’s Ministry of Agricultural, Food and Forestry Policies’ National Wine Committee would not approve a rosé version of Prosecco. It has finally relented, pleasing growers who have been begging for it.

The authorities, however, said sales couldn’t begin until after the new year -- which means that now, the first bottles of Prosecco rosé imported from Italy are arriving in the United States.

The industry is waiting for it -- and consumers too, presumably. Fortune magazine says more than 100 imported labels are looking to put their bottles of Prosecco rosé on the shelves this year.

Rosé’s popularity is well documented. It is the fastest-growing wine category in the U.S.

Wine research website Wine Opinions says an astounding 30 million bottles of Prosecco rosé will flood the market this year  much of it coming to the U.S. A few labels are already here -- good news for Valentine’s Day planners -- but the much larger shipments will be coming later in the year.