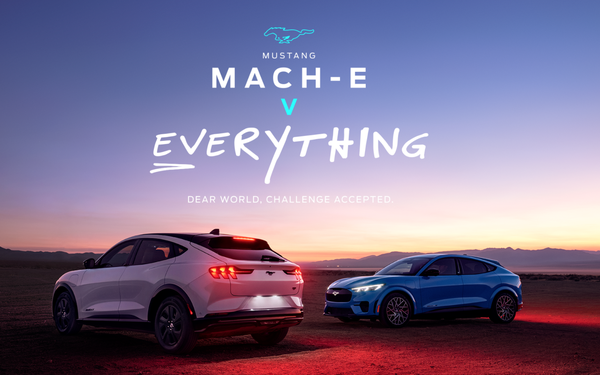 Ford is using online searches surrounding its new Mustang Mach-E vehicle to shape the direction it takes with its creative campaigns.

Since the Ford Mustang Mach-E was revealed in November 2019 at the Los Angeles auto show, there has been “tremendous interest” in the vehicle, says Thea Toney, Ford EV and SUV marketing communications manager.

As with any new vehicle, consumers had questions and were searching increasingly for the Mustang Mach-E versus competitors, she says.

For instance, “Tesla vs Mach-E” searches have gone up nine times during the past few weeks. This is in line with automotive comparison searches using “versus” specifically about electric vehicles, which have gone up by 64% in the last 12 months, Toney says.

“We were really intrigued by that,” she says. “We also monitored traditional vehicle searches to see which topics in particular those customers are really curious about."

These insights spurred the creation of Mustang Mach-E v Everything -- a campaign that spans five long-form films pitting the electric SUV against extreme elements: gravity, lightning, pit crew, DNA and rocket science. The campaign was developed by creative collaborator BBDO NY and 1stAveMachine directors, Aaron Duffy and Bob Partington, who are known for their technical approach to filmmaking.

Visuals include stunts to illustrate the vehicle's strengths, like showing how its 300-mile range compares to a 12-foot rocket going up in space, Toney says. The DNA video shows how the vehicle’s personal and adaptive technology is smart enough to tell the difference between drivers, even identical twins.

"We really want to put our best foot forward in the electric vehicle space and develop visually captivating content that really is bold and unexpected,” Toney tells Marketing Daily. “Rather than tapping into traditional this vs. that vehicle competitive comparisons, we wanted to pull together scientific experiments that people would find compelling and a little bit different."

The effort goes live on Ford.com and YouTube starting Feb 11. The paid media campaign debuts just ahead of National Battery Day (Feb. 18), on Feb. 14, with linear TV and digital placements.