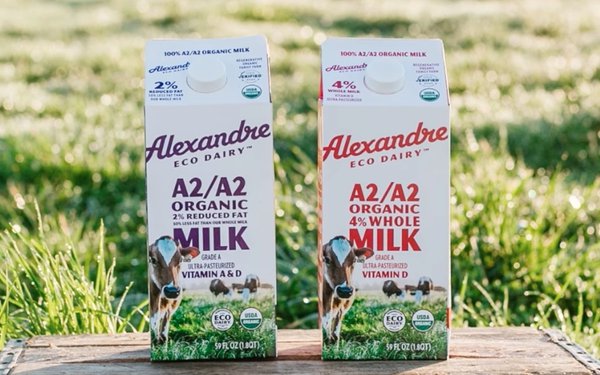 February is a good time to ask, given that it’s Lactose Intolerance Awareness month.

Turns out some people believe they’re lactose-intolerant when they’re actually sensitive to something else that naturally occurs in dairy milk.

Time for a gut check.

Milk produced by humans and cows historically contained the easily digested, beta casein protein called A2/A2. But over time, a genetic mutation in cows resulted in the introduction of the protein A1—which can be difficult for some people to digest.

In the process, A2/A2 will go from distribution at 265 Whole Foods stores to 350, and within the next six months will be available at some 1,000 retail doors.

According to co-founders Blake and Stephanie Alexandre, the company began cross-breeding their cows some two decades ago to remove the A1 protein from the animals’ gene pool.

Now the company has the seemingly unenviable task of conflating the issues of soil regeneration, cow genetics and the human digestive system while explaining it all to the multitude of consumers who have never heard of A2—much less A1.

In this interview—edited for clarity and length—the Alexandres and Alexandre Family Farm director of marketing Sharon Egan say that consumer education will be a gradual process given limited marketing resources at their disposal.

Stephanie Alexandre: Milk has been around for thousands and thousands of years and, in more recent times, there’s more and more people who have moved away from dairy. They think it’s lactose intolerance or it’s related to an autoimmune disease or something.

CPG FYI: How would you describe the target audience for A2/A2?

Blake Alexandre: Our target audience is every dairy drinker out there and everyone who wants to be a dairy drinker but believes they have digestive issues. The dairy industry is a pretty big industry. We’re a one-farm family that just wants to make a dent. So we don’t need all of the consumers. We just need 1% of them right now. Maybe 2%. And we’re happy, and we’ll grow with them.

CPG FYI: Does the term “regenerative” strike a chord with consumers?

Egan: Last year, Whole Foods named regenerative as the #1 food trend. Consumers are looking for products that align with their values of healing the earth and working in harmony with nature. Right now we’re the only game in town for certified, regenerative organic [dairy].

CPG FYI: Alexandre doesn’t use television advertising and isn’t very active on Instagram, has about 100 followers on Twitter and 4,000 on Facebook. How will you get the word out about A2/A2?

Egan: We’re trying to increase our social media activity and we have a number of educational graphics that we’re putting up on our website. We also have a sampling and education program scheduled with moms in the East.

CPG FYI: Just about every CPG marketer is innovating either internally or investing in/acquiring other companies. Is an outside investment an option that could speed things up for Alexandre?

Blake: Generally, the answer is no. We’ve certainly been approached by different folks throughout the process of our existence, and we’ve made it this far on our own.

We’re not looking to replace the entire dairy industry. We’re just trying to offer a very premium product for folks who are willing to pay more to get extra out of their purchase. We’re not trying to build a brand that we can sell to somebody.