Analyst: Disney+ To Surpass Netflix In Subs By 2026, Driven By Hotstar 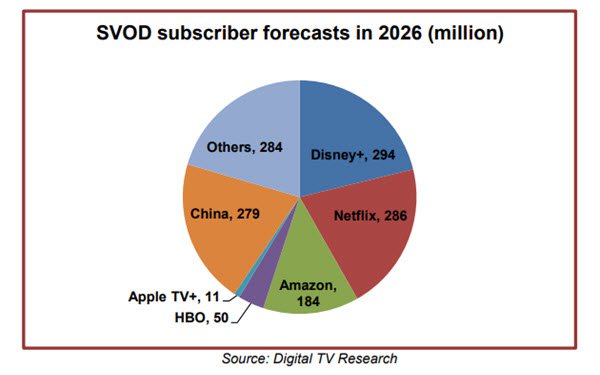 With the news that Disney+ gained 68.4 million subscriptions last year to hit nearly 94.9 million — surpassing its four-year goal in just 14 months — while Netflix outperformed expectations by gaining 8.5 million to hit 203.7 million, analysts are trying to scope out if and when the upstart might catch up with perennial frontrunner.

Disney itself is now projecting that Disney+ will reach between 230 million and 260 million subscribers globally by 2024.

However, DTVR says that India will be the only country where Disney+ will have more subscribers than Netflix: 98 million to 13 million.

That’s thanks to its integration with the Hotstar service and its large existing user base, as well as Disney+ Hotstar’s exclusive streaming rights for the Indian Premier League cricket franchise — which was viewed for 383 billion minutes in India last year, according to Digital TV Europe.

Hotstar subscribers in India and Indonesia already account for about a third of Disney+’s global subscribers, and in December, Disney confirmed that it expects 30% to 40% of the service’s subscribers to come from Disney+ Hotstar as of 2024.

“Disney+ Hotstar will roll out to 13 Asian countries by 2026,” noted Simon Murray, principal analyst at DTVR. “These countries will supply 108 million (37%) of the global Disney+ subscriber total.”

But given that Hotstar subscribers are paying less than a third of what U.S. subscribers pay for Disney+, Digital TV Research projects that Disney+ Hotstar will contribute only $2.62 billion, or 13%, of the platform’s revenue by 2026.

The researcher projects that worldwide Disney+ total at $20.76 billion — about half of projected revenue of $39.52 billion for Netflix.

“We believe that 45% to 50% of the incremental subscriber growth continues to come from Disney+ Hotstar, which we now calculate has RPU of less than $1, around $0.50 lower than we thought it was last quarter,” wrote MoffettNathanson’s Michael Nathanson in a research note, following Disney’s report last week.

Disney+ is also upping its prices in Europe (by two euros, to 8.99 per month) and other markets, in part based on its addition of Star entertainment content to the service in many markets as of Feb. 23.

Disney has also said that the added-value offering and accompanying higher pricepoints will apply in other new markets, including the Disney+ launch set for Japan and South Korea next year.