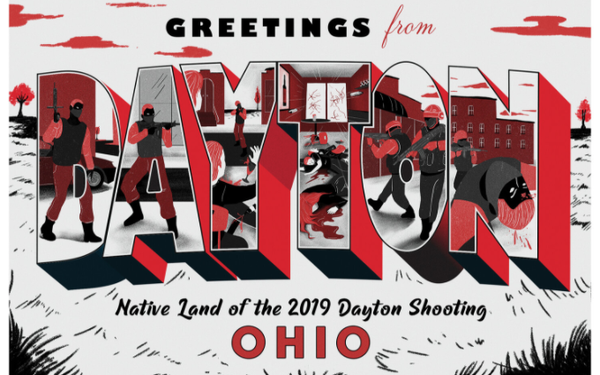 Change the Ref is aiming to force lawmakers to revamp gun laws via a provocative campaign that memorializes mass shootings across the United States.

The nonprofit enlisted MullenLowe U.S. to create a campaign featuring Shamecards, digital postcards that can be personalized and sent to lawmakers to ask for gun reform.

The cards look like touristy postcards, but instead remember the many murdered school children, workers, concert-goers and religious worshippers who were victim to such shootings.

Mass shootings have affected every state in the country, with more than 41,000 people dying by gun violence in 2020 alone.

Fifty cards were illustrated by 30 artists from 25 countries across the world, each of who, donated their time. They capture provocative, visceral scenes on the front, with short, sobering descriptions of each shooting on the opposite side.

In addition to the website with the virtual cards, a Shamecard mural is on display in Parkland, Florida, with pop-up postcard stands in Los Angeles, Houston, New York, and Seattle.

A two-minute video promoting the campaign was released on the third anniversary of the Parkland shooting on Feb. 14.

Manny and Patricia Oliver, founders of Change the Ref and parents of Parkland shooting victim Joaquin Oliver, say they aim to force lawmakers and Americans to face our country’s inaction, which has resulted in a tragic reputation for gun violence under the influence of the NRA.

Now, with a bankrupt NRA, new faces in Congress and a new administration, there’s an opportunity for change, says Manny Oliver.

“Shamecards were created to embolden lawmakers who wouldn’t budge on gun control to stand up to the NRA and to challenge the representatives and senators who promised us they were on our side, to keep their promise,” he adds.