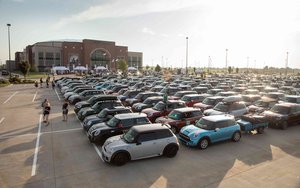 Welcome to year two of the pandemic and the havoc it wreaks on event planning.

Wikipedia is compiling an astonishing list of events cancelled due to the pandemic, and it continues to grow by the minute.

It’s anyone’s guess when it will be safe — or even allowed — to have auto shows and events for owners this year. Many states are still enforcing strict limitations on the number of people allowed to gather, with no end in sight.

That’s what has prompted Mini USA to once again postpone its hugely popular Mini Takes The States, a biannual cross-country road rally that attracts upwards of 3,600 Mini enthusiasts. The event from the BMW Group brand was originally set to take place July 18-26, 2020, then was rescheduled for summer 2021 and now to summer 2022.

Mike Peyton, vice president, Mini of the Americas, recorded a three-minute video announcing the postponement, which also shows off the new Mini hardtop edition. The video was posted on Mini social media today.

“It’s hard to believe it’s been almost a year since I shared the news that Mini Take The States was postponed,” Peyton says in the video. “At that time we were sure we’d be able to rally together this summer and share an optimistic Mini spirit at overcoming a national crisis. We’ve been monitoring the COVID-19 crisis carefully, and it’s clear it remains a volatile and uncertain situation.”

Beyond the public health data, Peyton says he has spoken with owners who have shared stories of job losses and health concerns about large gatherings.

The event averages 1,200 attendees each day and over 3,000 at the end, when all routes merge into a final destination -- far beyond current permitted crowd levels in every state that the event is scheduled to include, he says.

The 2018 event attracted more than 3,600 Mini owners who took part in the Rally to the Rockies. The two groups drove separate routes, one starting in Orlando, Florida, and the other in Portland, Oregon, converging in Keystone, Colorado, for a three-day festival.

“Without a crystal ball to see what revised crowd limits may be allowed in July, or the changes in individual state quarantine requirements or national vaccination rates, we made the incredibly difficult decision to reschedule Mini Takes The States once again,” Peyton says. “I want to be clear, Mini Takes The States is not going away. We are committed to our owners and this incredible journey that we all share every two years, and we will rally together in 2022.”

With the additional time and resources resulting from the postponement, the automaker is looking for ways to be more geographically inclusive in 2022, he says.

The Los Angeles Auto Show also sent out a “save the (new) dates” announcement today for its 2022 show. The event is traditionally held in November -- but when it didn’t happen in 2020, organizers optimistically planned for May 21-31.

With California still suffering from high infection rates and the ensuing closures and other restrictions, the show is pushing dates back to a return to November.

The last Los Angeles Auto Show took place Nov. 22-Dec. 1, 2019 and was one of the last major auto events before the pandemic, along with the Chicago Auto Show in February 2020. The New York show, traditionally in April, was postponed and subsequently cancelled for the first time since World War II.

Officials in New York State eased some restrictions starting Feb. 14 due to decreases in COVID-19 infections and hospitalizations in recent weeks. Indoor dining was allowed to resume in New York City at 25% capacity.

But other restrictions remain unchanged, including indoor and outdoor gatherings being limited to no more than 10 people. Travel restrictions that require quarantining remain in place.

That’s not going to work for an auto show, clearly.