Kevin James' 'Crew' Sitcom Seems Out Of Place On Netflix 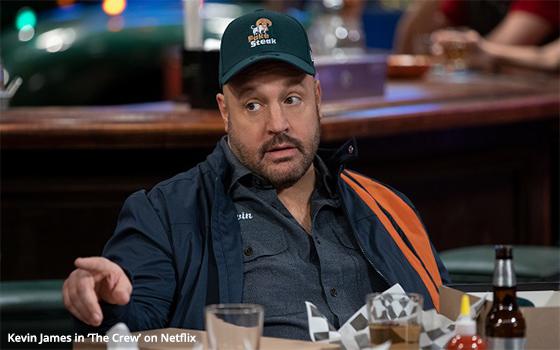 A new situation comedy on Netflix provides further evidence that the streaming service means to conquer the television world on all fronts.

Not content to produce and provide extraordinary content that is consistently critically acclaimed and award-winning, Netflix apparently does not mind dabbling in the ordinary as well.

So, just like the broadcast and basic-cable networks, Netflix now makes its own network-style reality shows and sitcoms.

This new workplace sitcom called “The Crew” is a case in point. This show is structured, written and produced just like a sitcom that would be made for any commercial-supported network such as CBS.

That happens to be the network most of us would associate with this Netflix show’s marquee star, comedian Kevin James -- title star of “The King of Queens” and “Kevin Can Wait” on CBS.

In “The Crew,” which began running this week on Netflix, James plays a man named Kevin who is the boss of a NASCAR racing team.

In the office/garage facility where this organization is headquartered, crew chief Kevin is seen interacting with his team members and his boss, played by Bruce McGill.

In these interactions, something like every third sentence or so is supposed to be funny. And whenever one of these bon mots is uttered, they are then followed immediately by gales of uproarious laughter which is obviously canned and added later.

This is standard, old-school, network sitcom fare. And in the case of this show, that statement is not a compliment.

The presence of this show on Netflix implies that Netflix intends to compete with network television on its own turf with shows, such as “The Crew,” which could have been picked up by CBS and fit right in.

The thing is, such a show feels right at home in the environment of CBS. On Netflix, shows like this one (and a handful of others that have come in for this very same kind of review here in the TV Blog) seem out of place.

But that’s just me. I don’t go on Netflix to find the latest Kevin James sitcom. I go there to find content that is the opposite of what I can see on the old networks.

For a growing number of people, network television shows are synonymous with words such as “stale,” “clichéd,” “formulaic” and “lame-brained.” It is hard to see how Netflix can benefit from imitating them.