Is That A Couch In Your Pocket, Or Are You Just Glad To Stream Me? 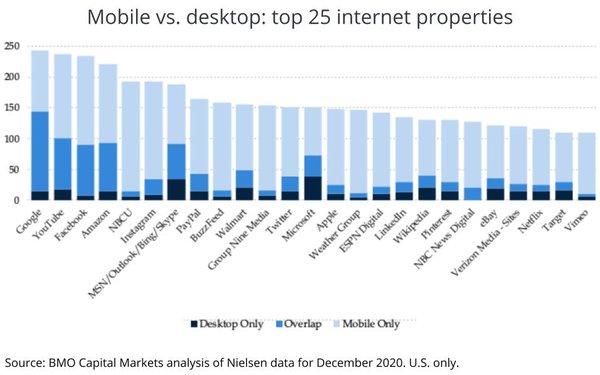 Of all the ethnographic research about how people's media behaviors have changed during the COVID-19 pandemic, I find mobile to be one of the most interesting and enlightening. Not because it exposed any new epiphany, but because it reaffirms an ongoing development that I believe defines mobile as a medium: It's not one.

Much like the wired internet before it, the untethered mobile web and apps infrastructure aren't really discrete media, so much as they are easier, more accessible and distributed means of accessing other forms of media.

Take this week's new insight that nearly half of mobile users stream video not while in transit, but from the convenience of their homes. Probably sitting on their couch, like a potato. Sound familiar?

The only thing surprising about this finding is that anyone would be surprised about it.

I've written about this before, but with the exception of certain endemic mobile applications (for example, navigation, proximity trackers, etc.), mobile devices are basically just the best available means of accessing what people would otherwise get from another form of media distribution: TV, radio, the wired web, etc.

So it makes a great deal of sense that mobile devices are how roughly half of people stream content during a pandemic. It also shouldn't be surprising that it's roughly half or more of how people access everything else they can do with digital media, whether that's a streaming service like Netflix or YouTube, or a commerce service like Amazon or Walmart.

It's just convenience. Or maybe a little bit of laziness. You know, like people too lazy to get off their couch to access another form of media.