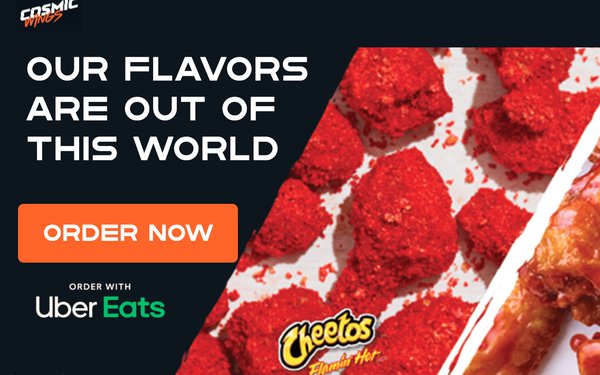 Applebee’s announced yesterday that nearly 1,300 of its U.S. kitchens are preparing Cheetos-flavored chicken wings and side dishes under the Cosmic Wings brand, available exclusively via Uber Eats delivery.

However, neither Cheetos nor other Frito-Lay snacks are available from Cosmic Wings or at Applebee’s locations, a Frito-Lay rep tells Marketing Daily.

Cosmic Wings is the second virtual-restaurant endeavor by Applebee’s and its parent, Dine Brands Global. Neighborhood Wings by Applebee’s had rolled out to nearly 1,000 locations by last October in a delivery-only, by exclusive arrangement with Grubhub.

For Cheetos, Cosmic Wings represents a continuation of QSR partnerships that have typically been limited-time offerings.