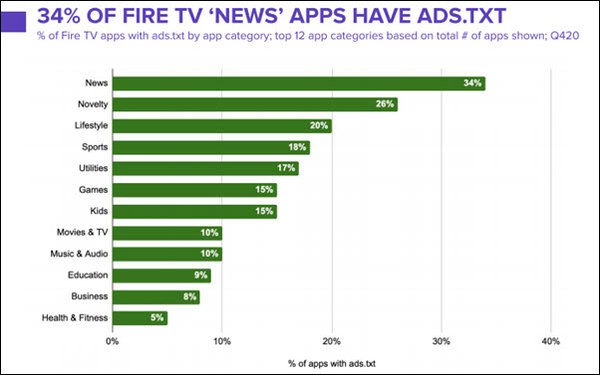 The Authorized Sellers for Apps specs, which have had a few updates since launch, help deter ad fraud — particularly the practice of spoofing, or tricking advertisers into pay for ads that weren’t delivered to the promised audiences — by allowing publishers to publicly declare the companies they authorize to sell their digital inventory.

(The top apps lists are based on number of programmatic ads sold, net of invalid traffic/IVT, as measured by Pixalate.)

Among the top 20 apps with app-ads.txt on both Roku and Amazon Fire TV, Hulu and Sling TV led the way on Roku, while Sling TV and Tubi led on Amazon Fire TV. 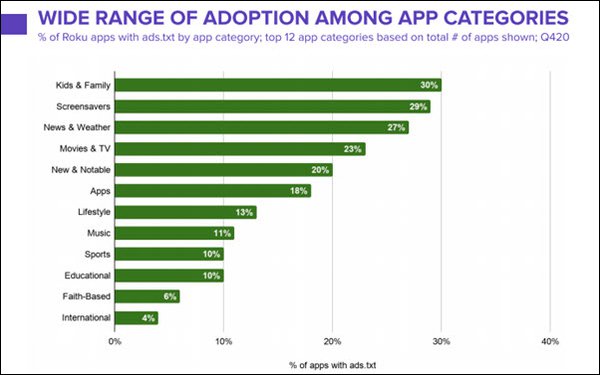 The number of kids/family Roku apps with the spec rose 66% -- possibly in response to children staying home during the pandemic, according to the analysis.

Categories seeing declines included movies/TV, educational, music, and news/weather, each of which was down 7%. (Declines can indicate removals of the spec or an increase in the number of new apps in a category that do not have the spec.)

Google and SpotX are most-listed as direct or reseller partners among both the top 500 and top 100 Roku apps, but companies including AppNexus, Magnite, Verizon Media and FreeWheel closely follow.

The total number of Amazon Fire TV apps with app-ads.txt rose by 10% during the year.

Thirty-four percent of Fire TV apps in the news category had app-ads.txt by year-end.

While the lifestyle and kids categories each saw a 3% increase in adoption, several categories saw declines — including business (-15%), movies/TV (-9%), and sports and music/audio (each down 5%).

Again, Google and SpotX are most-listed as direct or reseller partners among both the top 500 and top 100 Fire TV apps, again closely followed by companies including AppNexus, Magnite, FreeWheel and Verizon Media.